TRENTON – Two bills that would jumpstart the sale of zero- and low-emission vehicles in New Jersey, reducing the state’s reliance on foreign oil and improving the state’s air quality were approved yesterday by the Senate Environment and Energy Committee.

“Because New Jersey has set stringent guidelines for the number of zero- and low-emission vehicles sold each year – numbers that quickly accelerate within the next five years – we must determine a comprehensive plan to increase consumer acceptance of electric, natural gas and hybrid vehicles,” said Senator Bob Smith, D-Middlesex/Somerset, Chairman of the Senate Environment and Energy Committee. “The standards the state has set require that, by 2025, 15 percent of all vehicles sold in New Jersey must be zero-emission and plug-in hybrid cars. We need to take action now to show New Jersey consumers that these cars are economical and environmentally-friendly, so that we can reach our goal of reducing carbon emissions.”

The first bill, S-980, sponsored by Senator Linda R. Greenstein, D-Middlesex/Mercer, Vice-Chairwoman of the Committee, would provide a substantial boost to the state’s electric vehicle recharging infrastructure. The bill would require that the Department of Transportation (DOT), when financing projects from the Transportation Trust Fund, examine and promote the development of electric vehicle charging stations and other sources for supplying electricity to charge electric vehicles – such as battery switching stations.

According to the US Department of Energy, as of August 31, 2012, New Jersey ranks 26th in the nation in the number of both public and private alternative-fuel pumps installed, with 48 public electric charging stations and five public compressed natural gas stations.

“In terms of consumer buy-in of electric vehicles, we are often asking ourselves, what will come first the chicken or the egg? Will consumers buy electric and natural gas vehicles if we do not have the infrastructure for them to refuel these vehicles?” said Senator Greenstein. “This legislation takes these questions into consideration and works to create consumer confidence in electric vehicles by beginning to build the charging infrastructure we will need in the future.”

The second bill, S-2193, sponsored by Senator Paul A. Sarlo, D-Bergen/Passaic, and Senator Bob Smith, would encourage consumers through tax incentives to buy low-emission vehicles. The bill would exempt clean cars, such as plug-in hybrid and compressed and liquefied natural gas vehicles, which currently are imposed a seven percent sales tax, from half of the sales tax, making consumers responsible for only a 3.5 percent tax on these products. Currently only zero-emission vehicles, such as all-electric cars, are exempt from sales and use taxes in New Jersey.

The bill would also eliminate the sales tax on equipment to recharge electric vehicles or refuel natural gas vehicles.

“With their short driving ranges, electric vehicles are not always a practical purchase for all New Jersey commuters,” said Senator Sarlo. “But plug-in hybrids and natural gas vehicles can provide a great alternative for those who are conscientious regarding the economic and environmental problems relating to gas-powered cars, but who need the flexibility to drive long distances. By providing taxpayers with an incentive of a 3.5 percent sales and use tax break, we can encourage the public’s acceptance of these vehicles.”

“With the nation’s third highest commuter times, New Jerseyans spend an exorbitant amount of time on the road, much to the detriment of our state’s air quality, the health of our citizens and the environment,” said Senator Smith. “It is imperative that we find ways to reduce global warming pollution from tailpipes by encouraging consumers to purchase low-emission vehicles. Hopefully, this tax break will encourage consumers to take a second look at alternative fuel vehicles when they are purchasing a new car.”

In 2004, the state enacted the Clean Car Program requiring the state to adopt the California Low Emission Vehicle program. The federal Clean Air Act allowed for states to comply with either their regulatory emission standards or to use California’s more stringent standards. The California Low Emission Vehicle program sets average emission standards on fleets of cars sold by each car manufacturer in the state. The provisions of the program include a percentage of sales from low- and zero-emission vehicles in the marketplace that will continue to increase yearly.

There are currently twelve states, besides New Jersey and California, which have adopted the California Low Emission Vehicle program.

Both S-980 and S-2193 were approved with votes of 5-0. They now head to the Senate Budget and Appropriations Committee for further review. 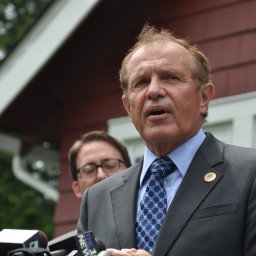