TRENTON – The Senate unanimously approved legislation today sponsored by Senator Nia H. Gill that would increase transparency with regard to how libraries are funded.

The measure (S-2068) would create a dedicated line item on residents’ property tax bills showing the amount they pay to support their local library, just as tax bills include a line item displaying the amount homeowners pay to fund county libraries.

“The value residents get from community libraries is enormous,” said Senator Gill (D-Essex). To give an example, a resident with a home assessed at $200,000 pays about $5 a month for access to an array of resources in their public library. From the ability to borrow books, to free access to the Internet, I believe once taxpayers see the portion they pay in writing, they’ll agree it is a sound investment that is worth their support.”

The legislation passed the full Senate by a vote of 40-0. It now heads to the Assembly for consideration.

Rice: We Must Act Now as We Continute to Debate School Construction Later

TRENTON – Senator Ronald L. Rice released the following statement today during the Joint Committee on the Public Schools hearing on School Construction concerning the need to quickly approve his bill that would provide $3 billion to complete the projects put on hold.

“We have a responsibility to adequately meet the needs of our growing public schools, because failure means our children and residents will suffer. 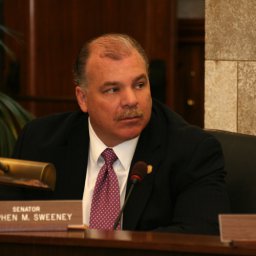 TRENTON – A bill sponsored by Senate Majority Leader Steve Sweeney which would establish a continuing education requirement for real estate professionals seeking licensure in New Jersey was approved by the Senate today by a vote of 36-0, receiving final legislative approval.

“The real estate market in New Jersey and around the nation is in crisis, and a major contributing factor to that crisis has been some bad advice home buyers received from their real estate representatives,” said Senator Sweeney, D-Gloucester, Cumberland and Salem. “Unfortunately, as the housing market was in its boom years, realtors pushed prospective buyers to go bigger and more expensive, in some cases encouraging buyers to go after homes that they simply couldn’t afford. Through this legislation, we’re ensuring that real estate professionals are kept up to speed on the latest trends in the market, and can help buyers get the best homes for their money.”

TRENTON – A measure sponsored by Senate Majority Leader Steve Sweeney, which would require real estate professionals to complete continuing education courses as a condition of their license renewal was approved today (4 to 1) by the Senate Commerce Committee.

“The real estate market crisis of the past few years was caused, in part, by home buyers securing loans and purchasing properties that they simply could not afford,” said Senator Sweeney, D-Gloucester, Cumberland and Salem. “The role of a professional real estate agent is to guide potential buyers, and help them to select the property that best fits their needs, that is also within their price range. As the Federal government continues to work to improve the real estate market, it is imperative that real estate professionals know ins and outs of the market, so that they can best advise their clients on making responsible purchases.”