Girgenti Bill Gets Tough On Those Who Harm Nurses

TRENTON – Legislation sponsored by Senator John A. Girgenti to upgrade the penalty for simple assault to an aggravated assault charge if the victim is a nurse, was approved by the Senate Law Public Safety and Veterans’ Affairs Committee today.

“Our nurses provide vital life saving services and unfortunately, many have reported being victims of verbal assault or abuse and physical attacks by patients and family members or visitors,” said Senator Girgenti, D-Bergen and Passaic. “We currently face the challenge of finding qualified nurses, and it would be in the State’s best interest if we help encourage health professionals by ensuring their working conditions are as comfortable and as safe as possible.”

Senator Girgenti noted that, “The US Department of Justice reported that each year, 430,000 are victims of violent crimes in the workplace.”

The bill, S-1779, would upgrade the crime of simple assault against a nurse to an aggravated assault crime.

“Simple assault is usually a disorderly persons offense, while aggravated assaults falls into several categories based on the degree of harm, the degree of disregard for the safety of another, or the weapon used,” said Senator Girgenti.

According to Senator Girgenti, other occupations that have had the degree of assault upgraded include: law enforcement officers; volunteer firefighters; emergency medical service workers; bus drivers and rail service workers; corrections employees, probation officers and sheriff’s officers; and utility employees.

“Upgrading the degree of assault against these professions is thought to deter retaliation against a person in a position of authority,” added Senator Girgenti. 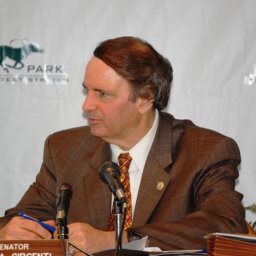 TRENTON – Legislation sponsored by Senator John A. Girgenti to upgrade the penalty for simple assault to an aggravated assault charge if the victim is a nurse, was approved by the full Senate today.

“Violence against nurses occurs frequently and has a substantial effect on the well-being and job satisfaction of all health care providers,” said Senator Girgenti, D-Bergen and Passaic. “Because violence in the workplace is an underreported concern for many health care workers, it has been difficult to stop. By changing our laws and toughing our penalties against those who harm nurses, we can deter these violent acts and improve the quality of life for those in the health care field.”