TRENTON – A bill sponsored by Senator Raymond J. Lesniak and Senate Majority Leader Steve Sweeney which would create a Vote by Mail system to allow more New Jerseyans to take part in the democratic process was approved by the Senate today by a vote of 24-14.

“Voting by mail has become a popular alternative nationwide for busy voters unable to get to the voting booth on Election Day,” said Senator Lesniak, D-Union. “Oregon and Washington State have an electoral system that’s run entirely from the mailbox, as opposed to the ballot box, and many other states are considering hybrid systems which balance voter convenience with vote integrity. As New Jersey tries to get more people to exert their voice in government, we must make it easier for voters to vote on their own terms, rather than try to squeeze something else into what can be a hectic workday.”

The bill, S-1380, would eliminate the designation of “absentee ballot” in favor of a three-tiered Vote by Mail system. Under the first tier, the system would allow voters who wish to vote by mail for all future general elections without further request for a mail-in ballot to do so. Under the second tier, voters would have the option to vote in all elections that occur within a calendar year by mail-in ballot, and under the third tier, voters would have the option to vote by mail in only an individual election.

The bill and subsequent amendments address the possibility of voter fraud, including requiring the county clerk to compare the signature on the mail-in ballot with the signature on the voter’s permanent voting registration; requiring the Statewide Voter Registration System to record and monitor applications for mail-in ballots; and prohibiting the county clerk from transmitting a mail-in ballot to voters deemed to be inactive. The bill also requires the Statewide Voter Registration System to enact a provision to allow county boards of election to verify the identity and signature of each person requesting a mail-in ballot.

“As we expand voters’ options to have their voice heard, we have to be careful not to expose the election process to voting fraud and abuse,” said Senator Sweeney, D-Gloucester, Cumberland and Salem. “This bill strikes the perfect balance between convenience and security, and proves for multiple layers of scrutiny to root out fraud. While we want to give people as many options as possible to exercise their right to vote, we cannot do so at the cost of the integrity of the election, and must make sure that every vote is counted accurately and honestly.”

The bill now heads to the Assembly for concurrence with Senate amendments, and is scheduled for a vote later today. If approved, it would go to the Governor to be signed into law. 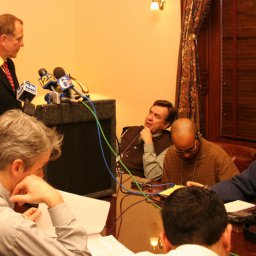 TRENTON – A bill sponsored by Senator Raymond J. Lesniak and Senate Majority Leader Steve Sweeney which would create a Vote by Mail system to allow more New Jerseyans to take part in the democratic process was approved by the Senate State Government Committee today by a vote of 3-2.

“Throughout the nation, more and more states are adopting Vote by Mail systems to give busy Americans a chance to participate in their democracy,” said Senator Lesniak, D-Union. “In Oregon and Washington, the entire voting process takes place at the mailbox, rather than the ballot box, and California has a Vote by Mail program similar to the one we’re proposing in this legislation. As we work to expand voter participation and give voters an alternative to traditional polling locations on Election Day, Vote by Mail will be a big part of our efforts moving forward.”