“It is time to face the facts: the pension and benefits system has been pushed to the brink of collapse,” said Sweeney (D-Gloucester/Cumberland/Salem). “Unless we reform the system now, the state will have no option but to break its promise to career public servants.”

“New Jersey’s pension system is on life support,” said Kean (R-Union/Essex/Morris/Somerset). “If we don’t act now, it will be too late to avoid a crisis that would be costly to both taxpayers and government employees who depend on the system. These are common-sense reforms that have bipartisan support.”

“Something must be done and fast if we are to save our system from collapsing under the weight of its debt and failing to deliver on its promise to provide long-term security for people who have dedicated their lives to teaching our children, protecting our citizens, and enforcing our laws. We cannot afford to punt on the critical decisions that must be made to avert a complete collapse of the pension system,” said Senate Majority Leader Barbara Buono (D-Middlesex).

Sweeney said his goal is to have the reforms pass the full Senate before the end of February.

According to published reports, the various state pension plans are underfunded by at least $30 billion after years of skipped or partial payments.

The leaders noted that the legislation would adopt recommendations from the 2006 Special Session on Property Tax Reform’s Joint Legislative Committee on Pension and Benefits Reform. That committee made 41 proposals for overhauling the public pension and benefits system to ensure its long-term viability for career state employees. Fifteen recommendations were enacted legislatively; other reforms were achieved through collective bargaining.

The first bill (S-2) – sponsored by Senators Nicholas P. Scutari and Kevin O’Toole – would limit enrollment in the defined-benefit pension system to full-time employees who work at least 35 hours per week at the state level or 32 hours in local government and public schools. All other new employees earning at least $5,000 annually could enroll in a 401(k)-style defined contribution plan. Current employees with fewer than 10 years of service would be allowed to switch from the defined-benefit plan to the defined-contribution plan, or withdraw from the system altogether.

The bill also would reconfigure the equation used to calculate pension benefits for future employees by dividing the number of years worked by 60, rather than the current 55. Also, the number of “high salary” years used for calculating benefits for workers in the public employee and teacher pension systems would be raised to five years from the current three; enrollees in the police, fire and State Police systems would have their pensions based on their highest three years – up from the current one-year standard.

The bill also would designate a “one job-one pension” rule for multiple job holders, with only the highest-salaried position counting towards a pension.

“For far too long, governors and Legislatures have pushed off the state’s pension problem. If we are ever to repair this broken system, we must take a realistic approach to defining pension and benefit parameters,” said Scutari, (D-Union/Middlesex/Somerset). “Past actions to boost pensions only increased the unfunded liability, placing at risk the retirement of career employees. Reform is vital to ensuring workers get the benefits promised and taxpayers are not left to shoulder excessive costs.”

“These common sense solutions are based on the findings of a bipartisan panel that spent the entire summer of 2006 taking testimony on the pension crisis,” said O’Toole (R-Essex/ Bergen/Passaic), who also served on the joint committee. “These bills are a good first step toward making our pension system a reward for dedicated service by career public employees, not a perk for the politically connected. If these bills pass, New Jersey will continue to have one of the most generous retirement systems for public employees in the nation and the world. The changes are designed to bring employee benefits more in line with what taxpayers reasonably can be expected to pay. Though stronger measures will be needed in the future, these bills will help keep taxpayers from crippling tax increases and government workers from losing their pensions and retirement health care.”

State employees would be required to work at least 35 hours per week to qualify for health benefits, with local and school employees having to meet a minimum 25-hour-per-week standard.

The bill is sponsored by Senators Michael Doherty and Jim Whelan.

“Taxpayers want resources directed to job creation and economic growth. These bills are designed to provide workers with secure retirements without taking more money from small business owners and entrepreneurs we need to create jobs and prosperity,” said Doherty (R-Warren/Hunterdon). “Taxpayers simply can’t afford to pay ever-increasing public employee insurance costs when many of them don’t have health coverage or even a job. It’s just not fair that government workers, especially well-compensated employees, don’t pay part of health premiums when private sector workers of all earnings levels must do so.”

Senator O’Toole and Majority Leader Buono are sponsoring a measure (S-4) to limit sick leave payouts for all new local and school employees to $15,000 – the standard currently in law for state employees. The bill also would allow new local government and school employees to carry over only one year’s worth of vacation year-to-year and would eliminate the current sick leave injury program.

Finally, a proposed constitutional amendment (SCR-1) would require the state to annually meet its obligation for each pension plan it operates. If approved by voters in the November General Election, the state would have seven years beginning with the 2012 fiscal year to catch up to its full obligation – starting with Fiscal Year 2019, the full payment would be required every year. It is sponsored by Senate President Sweeney and Republican Leader Kean.

“New Jersey has made a promise of retirement security to its hundreds of thousands of public sector employees,” Kean said. “The legislation I am co-sponsoring requires the state to put away the money needed to keep its promises.”

“These reforms would not only relieve some of the tremendous fiscal stress governments at all levels face, but they would ensure stability and predictability for taxpayers and public employees alike,” said Senator Paul Sarlo (D-Bergen), chairman of the Budget and Appropriations Committee. “Without these changes, the long-term viability of the entire public pension system would continue to be jeopardized, potentially leaving both taxpayers and public workers with nothing.”

Each of the reforms has at least 23 Senate sponsors – more than the threshold to pass them.

“These reforms are necessary to restoring New Jersey’s long-term fiscal footing and returning sanity to a pension and benefits system that was allowed to spiral out of control,” said Sweeney. “They were conceived in the spirit of bipartisanship, and I believe they will be enacted in bipartisan fashion, as well.”

Full text of the bills is available at the Legislature’s Web site: www.njleg.state.nj.us

TRENTON – The full Senate today overwhelmingly approved a bipartisan package of legislation to return the state’s pension and benefits system to its original goal of providing for the retirements of rank-and-file public employees and ensure the its long-term viability.

“These reforms are necessary to restore New Jersey’s long-term fiscal footing and return sanity to a pension and benefits system that was allowed to spiral out of control,” said Senate President Stephen M. Sweeney (D-Gloucester/Cumberland/Salem). “Without these changes, the state would soon have no option but to break its promise to career public servants.” 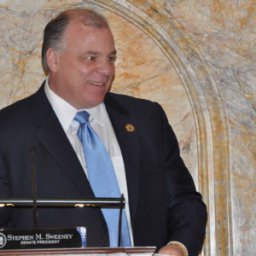 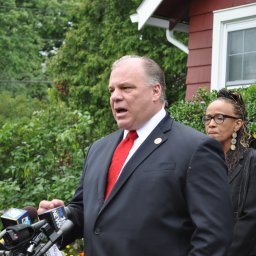 By Steve Sweeney In New Jersey, the economic burdens for middle-class families and working people continue to make life hard….

“During today’s address Governor Codey touched on the important subject of the State’s inadequate minimum wage. New Jersey has one of the highest costs of living in the nation, but at $5.15, our minimum wage ranks among the states with the lowest cost of living.