TRENTON – A bill sponsored by Senator Bob Smith, Chairman of the Senate Environment Committee, which establishes a licensed site remediation professional program in New Jersey to speed up the clean-up of contaminated sites around the State was signed into law today by Governor Corzine.

“This new law represents a huge step forward in revitalizing and remediating contaminated sites and transforming them into viable real estate,” said Senator Smith, D-Middlesex and Somerset. “For so long, polluted sites have been allowed to linger because the State simply didn’t have the resources in the DEP (Department of Environmental Protection) to cut down on the backlog. Through this law, environmental consultants would be deputized by the DEP to handle non-sensitive site clean-up approval, and we can finally begin to reclaim some of these sites for the people of the Garden State.”

“This new program will not be without sufficient oversight,” said Senator Smith. “DEP will be watching very closely to make sure that all site clean-ups are conducted based on the best interests of the public. Ultimately, the end-result will mean that neighborhoods that have lived with environmental blight as a way of life – in some cases for decades – will finally be able to turn the page and reclaim contaminated sites.”

Senator Smith noted that the bill contains safeguards against abuse of the program, to ensure that consultants are acting in the public interest. The bill requires that consultants meet rigorous licensing standards and adhere to a strict code of conduct to protect against conflicts of interest. The bill also creates an independent licensing board which would be given strong enforcement authority over conduct and ethics standards. And finally, the bill ensures that the most polluted sites would remain subject to DEP approval only, and will not fall under the provisions of the licensed site remediation professional program.

In addition to the safeguards outlined within the legislation, an executive order also signed by Governor Corzine today to outline the implementation of the licensed site remediation professional program provided even more stringent protections for the public. Under the executive order, licensed site remediation professionals will be held to high standards of transparency, and DEP will be required to increase monitoring of work being conducted at certain sites, including areas where groundwater was polluted, residential areas and areas to be used for educational facilities. The DEP will also be required to conduct annual reviews of the licensed site remediation professional program, and issue reports to the Governor and the Legislature on the implementation of the program.

“I think the Governor’s Executive Order makes an already-good program even better, and sets very specific expectations from the licensed site remediation professional program,” said Senator Smith. “At the end of the day, this program is going to be hailed as one of New Jersey’s great environmental achievements of the early 21st century, and is going to revolutionize the process of contaminated site review and cleanup in the Garden State.”

The bill received final legislative approval in the Senate by a vote of 34-4 in March. 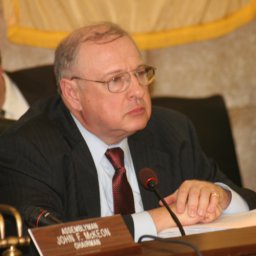 TRENTON – A bill sponsored by Senator Bob Smith, Chairman of the Senate Environment Committee, which would establish a licensed site remediation professional program in New Jersey to speed up the clean-up of contaminated sites around the State was approved by the full Senate today by a vote of 34-4, receiving final legislative approval.

“Right now, New Jersey has a backlog of over 20,000 known contaminated sites in the State that are not being cleaned up fast enough,” said Senator Smith, D-Middlesex and Somerset. “These sites are a blight on our neighborhoods, a major public health hazard, and an impediment to the environmentally-sound redevelopment of our aging urban and suburban industrial communities. If we’re going to overcome the backlog, ensure the public health and transform these sites into useful, viable property, we need to change how we handle the site remediation approval process in the Garden State.”

TRENTON – A bill sponsored by Senator Bob Smith that would help accelerate the transformation of abandoned and contaminated properties into productive economic engines received approval today from both the Senate and Assembly environment committees after a lengthy joint hearing.

Bill S1897, which is modeled after a highly successful program in Massachusetts, would create a Licensed Site Remediation Professional (LSP) program within the Department of Environmental Protection, providing (re)developers with a more efficient means to remediate sites that pose a hazard to public health.