TRENTON – A bill sponsored by Senate Majority Leader Steve Sweeney which would propose a constitutional amendment to the voters to prohibit the State from raiding any funds established through an assessment on employee’s wages to protect workers in need was approved by the Assembly Labor Committee today.

“The historic practice of raiding employee benefits funds to shore up budget shortfalls has left many of these funds unstable, and unable to meet the needs of New Jersey’s hard-hit workers in their time of greatest need,” said Senator Sweeney, D-Gloucester, Cumberland and Salem. “We cannot continue this brand of robbing-Peter-to-pay-Paul politics in the State. New Jersey’s taxpayers deserve better than the same old shell game of funneling funds away from safety net programs to put off the hard decisions we were elected to make.”

The bill, SCR-60, which is also sponsored by Senate Minority Leader Tom Kean, R-Union, Essex, Morris and Somerset, would propose a ballot question to the voters to prohibit New Jersey from raiding State funds which are paid for through assessments on workers’ wages and are intended exclusively to benefit employees. Senator Sweeney said that under his bill, the constitutional ban on raids would apply to the unemployment compensation fund, the State disability benefits fund, the Second Injury Fund, the new paid family leave fund, and any other funds or programs which are paid for through wage assessments and statutorily created to benefit employees and their families or dependents.

“These funds are paid for through wage assessments, and should act as insurance against the unthinkable – not as a cash cow for a cash-strapped State government,” said Senator Sweeney. “However, in practice, we’ve seen time and time again policymakers willing to go back to the well and tap these safety net programs for other purposes. This is bad budget policy, and short-changes the hard-working men and women who’ve paid into these funds for years to help get them through should they ever need a helping hand.”

According to Senator Sweeney, the bill is specifically designed to combat the willingness in the past under both Democratic and Republican regimes to tap into these funds as a quick and supposedly painless infusion of cash in difficult budget times, allowing them to avoid politically unpopular spending cuts or tax increases. Senator Sweeney noted that more than $400 million was diverted from the Temporary Disability Insurance Fund from 1995 through 2007. Nearly $4.7 billion has been diverted from the Unemployment Insurance Fund since 1993, forcing employer tax increases and State cash infusions in recent years just to keep the fund solvent and paying out benefits to jobless New Jerseyans.

“The time has come to end the one-shot budgeting and fiscal gimmicks which fail to plan for New Jersey’s future,” said Senator Sweeney. “Raids on employee- and employer-funded safety net programs only prolong the inevitable reckoning of State finances, and jeopardize our ability to protect vulnerable workers when they need the help the most. These raids have taken place under both political parties, and it’s time for New Jersey’s voters to once and for all prohibit this shameful and dangerous practice from ever happening again.”

The bill was unanimously approved by the Senate last December. 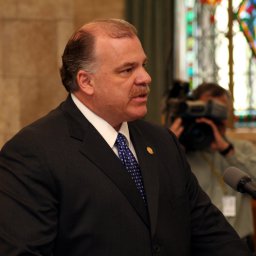 TRENTON – Senate Majority Leader Steve Sweeney, D-Gloucester, Cumberland and Salem, issued the following statement today regarding the Governor’s announcement of the unemployment numbers’ for December and the need for action in the Unemployment Insurance (UI) fund to avoid a massive tax increase on employers in New Jersey:

“Today’s announcement of a 1 percent increase in the unemployment figures from November to December is certainly troubling news. As we continue to feel the effects in New Jersey of the national economic downturn, we have to be open to doing whatever we can to help put people to work and improve our economic standing.

TRENTON – A measure sponsored by Senate Majority Leader Steve Sweeney and Senator Thomas Kean H. Kean, Jr., which would prevent worker and employer contribution funds like the Unemployment, Temporary Disability Insurance, and Paid Family Leave funds from being “raided,” and used for other purposes like balancing the State budget was unanimously approved today by the Senate Budget and Appropriations Committee.

“Voters deserve the chance to weigh in and decide whether or not they want to protect these funds that employees work so hard to secure,” said Senator Sweeney, D-Gloucester, Cumberland and Salem. “As a member of the Budget and Appropriations panel, I understand the hard decisions that go into crafting the State budget; however, we cannot allow our finances to be balanced on the backs of hard-working men and women who might have a legitimate need for a safety net due to unemployment, injury or family emergency. In essence, the bill would put these employee and employer contributions in a constitutional lock-box, only to be opened when needed by the workers who have been paying into it each month.”