TRENTON – Legislation sponsored by Senate President Steve Sweeney that would save taxpayer dollars by weeding out fraud in the pension disability fund system cleared the Senate Budget and Appropriations Committee today.

“Every cent of taxpayers’ money should be held accountable. That’s just common sense. And with hard working people in this state paying 20 percent more in property taxes in the last two years, they should not be forced to pay a nickel more because of any kind of government waste or fraud,” said Sweeney (D-Gloucester, Cumberland, Salem).

Media accounts last year highlighted an increase in the amount paid out through the pension disability system in the last few years, from $68 million in 2007, to $91.5 million in 2010. The increases came after a series of court decisions that expanded who might be eligible for pension disability. That, in turn, has created a greater opportunity for potential abuse of the system.

Under the bill, S1913, anyone applying for ordinary disability and accidental disability benefits must be certified as not only incapacitated for their former job, but also for another other available job that might be assigned for the same pay. In addition, in the Judicial Retirement System (JRS), the bill would establish an ordinary disability (needs 10 years of service to qualify) benefit at 1.5 percent of compensation multiplied by years of service with a minimum of 40 percent. Currently, JRS does not distinguish between ordinary or accident disability; it only has a disability retirement with a benefit of three-fourths of final salary.

“There is no question that there are individuals who have suffered serious work related injuries and are entitled to disability payments. At the same time, there are those looking to game the system at the expense of the taxpayer. We cannot allow that to continue to happen. The measures outlined in this bill will go a long way towards eliminating fraud in the system,” said Sweeney.

The bill would also establish a fraud unit within the Office of the Attorney General, for the prevention and identification of fraudulent disability pension claims and payments. Other changes to the current structure include that an application for accidental disability must be filed within two years, instead of the current five years, of the original traumatic event: Also, a temporary joint labor and management Accidental Disability Pension Review Committee would be created. The committee would study the current requirement that a member of TPAF, JRS, PERS, PFRS and SPRS must be permanently and totally disabled as a direct result of a traumatic event in order to be deemed eligible for the receipt of an accidental disability benefit and develop a recommendation for specific criteria.

The bill now heads to the Senate floor.

TRENTON – The Senate approved legislation today sponsored by Senator Shirley K. Turner that would enact new nutritional standards for food sold in public schools, limiting the availability of high-calorie beverages and foods high in sugar or fat to students during school hours.

“Obesity is a problem facing far too many school-aged children today,” said Senator Turner, D-Mercer. “The eating habits they learn while young will stay with them throughout their lives, so we must begin to expose them to healthy choices now, while they are still in school.”

LYNDHURST – Senator Paul A. Sarlo, the Chairman of the Senate Labor Committee which initiated the reforms of the workers compensation system, today said their enactment by Governor Corzine expedites a “fairer, more efficient and more responsive program” for both workers and employers.

Senator Sarlo, D-Essex, Passaic and Bergen, credited The Star-Ledger for “exposing the need for fine-tuning and reforming a basically good system” designed to pay workers who are injured on the job while protecting the interests of business to flourish in New Jersey. He issued the following statement after Governor Corzine ceremonially signed five reform bills at Frank’s Pontiac/GMC at 325 Orient Way.

“Today, we are witnessing a positive response to changing a basically good system to make it even better. We gave workers comp judges the power they need to crack down on the bad players in the system while ensuring greater fairness to both workers and employers. 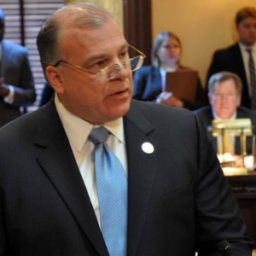 “Every cent of taxpayers’ money should be held accountable. That’s just common sense. And with hard working people in this state paying 20 percent more in property taxes in the last two years, they should not be forced to pay a nickel more because of any kind of government waste and fraud,” said Sweeney (D-Gloucester, Cumberland, Salem).

TRENTON – The Senate Education Committee approved legislation sponsored by Senators Shirley K. Turner and Ellen Karcher that would enact new nutritional standards for food sold in public schools, limiting the availability of high-calorie beverages and foods high in sugar or fat to students during school hours.

“Far too many school-aged children are dealing with obesity and the health problems it causes,” said Senator Turner, D-Mercer. “School isn’t only about teaching kids the three R’s. It’s also about exposing them to a healthy and responsible behaviors and giving them the knowledge needed to make the right choices as they reach adulthood. The lessons learned now in choosing healthy foods will stay with them a lifetime.”