“New Jersey’s UI fund has been tapped in good times and bad to pay for a variety of unrelated programs, and over the last few years, the tab has come due,” said Senator Sweeney, D-Gloucester, Cumberland and Salem. “It’s only through massive cash infusions by the State Legislature and a tax increase on employers this fiscal year that we’ve kept the fund solvent. This cycle of diversion and emergency infusion is bad public policy, jeopardizing the fund’s long-term fiscal integrity and costing taxpayers billions.”

“We have to do better in State government to live within our means, and the historic pattern of diversions from the UI fund represent the excesses that have created billions in unfunded debt obligations for New Jersey,” said Senator Sarlo, D-Bergen, Essex and Passaic. “Through this legislation, we’re eliminating some of the temptation to raid the UI fund in years of plenty, and giving employers a much-needed unemployment insurance tax break when we can afford to do so. This new law is pro-business and will hopefully encourage better budget practices by future New Jersey public officials.”

The new law, S-562, creates a trigger for an automatic reduction in the unemployment insurance tax paid by employers into the UI fund by 25% when the fund’s reserve ratio exceeds five percent. Under the new law, if the reserve ratio were to exceed 7.5%, employer contributions would be reduced by fifty percent. According to the bill sponsors, the intent of the legislation is to prevent an excessive surplus in the UI fund and reduce the likelihood that Fund revenues would be redirected to other purposes in State governments.

Senators Sweeney and Sarlo noted that prior to Fiscal Year 2007, the UI fund was routinely raided as a convenient one-shot revenue to plug holes in various budget initiatives, most often to offset the cost of charity care. From FY 1993 through FY 2005, more than $4.5 billion was redirected from the UI fund during both Republican and Democratic administrations. According to the lawmakers, this constant and consistent raiding of the UI fund has left it depleted and unable to meet the increased need as a result of spiking unemployment numbers caused by the current national economic crisis.

“For better or worse, in good times and bad, under Democratic and Republican regimes, the UI fund has been a cash cow to help New Jersey Governors and Legislators avoid politically perilous tax increases and spending reductions,” said Senator Sarlo. “Now, when we need the fund the most, the UI fund cannot meet increased demand from jobless State residents, and has had to be propped up by cash infusions from State government and tax increases on hard-hit employers. This new law will discourage future policy makers from such reckless diversions which can turn surpluses into deficits overnight.”

“New Jersey lawmakers cannot depend on the one-shot revenues and financing gimmicks which have been the status quo in the Garden State for far too long, under both parties,” said Senator Sweeney. “Diverting resources away from the UI fund may have seemed safe in times of surplus, but as we see now, these policies have a destabilizing effect, and have hampered the fund’s ability to protect workers when they need the help the most. Through this legislation, we can leave money in the pockets of employers during boom years, and ensure we have enough of a safety net to get us through in bust years.”

The bill received final legislative approval from the Assembly in June. 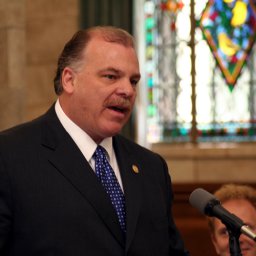 TRENTON – The Senate today approved a measure by a 39-0 vote to significantly reduce required payments by employers into the Unemployment Insurance Trust Fund if its reserves reach sufficient levels to trigger payment reductions of up to 50 percent.

The Senate approved the bill, S-562, sponsored by Senate Majority Leader Stephen M. Sweeney and Senator Paul A. Sarlo, and sent it to the Assembly for consideration.