TRENTON – Senator Shirley K. Turner today welcomed the roll out of a new payment incentive program by the New Jersey Motor Vehicle Commission (MVC), a measure she sponsored in the Senate that is designed to help cash-strapped residents get back behind the wheel legally and find work while also helping the state recoup outstanding revenue.

“Many New Jerseyans with suspended licenses are caught in a Catch-22,” said Senator Turner, D-Mercer. “If they don’t have the money to pay off excessive motor vehicle surcharges, they can’t restore their licenses, which strips many of the means to get to and from work in order to earn money to pay off these surcharges. Rather than trap these people in an endless cycle of joblessness and ever-increasing surcharges, this program cuts drivers a break, and will hopefully deliver a much-needed cash infusion to our desperate state coffers.”

Senator Turner’s bill (S-2903), which was signed into law in January, called for the MVC to establish a promotional payment incentive plan for drivers who have failed to pay any motor vehicle surcharges levied for vehicle violations, convictions or accumulated motor vehicle points. However, the law excludes any surcharges levied against drivers for drunk driving or failing to consent to a blood alcohol test.

The new Surcharge Payment Incentive Program, announced today by the MVC, will run from June 15 through July 30. Under the program, interest will be waived if a driver with an outstanding surcharge balance pays off the full principal and collection costs by July 30. Drivers who have already paid off their principal and owe only interest on the surcharges will see that interest waived under the program. Those who cannot afford to pay the principal and collection costs by July 30 can arrange for an extended payment plan that could reduce their monthly payments by as much as half.

The state estimates that more than a quarter of a million drivers owe a combined $633 million in surcharge debt. A driver who owes the average surcharge debt of $2,400 could save as much as $600 under the incentive plan. Senator Turner noted that increasing fee collections by the MVC is a welcome byproduct of the program at a time when the state budget faces a massive shortfall, however the more important goal is to give suspended drivers a chance to legally get back behind the wheel.

“Because motor vehicle surcharge fees and collection costs can add up, many drivers feel like they have no choice but to ignore license suspension orders in order to continue providing for their families. Hopefully, many suspended drivers will take advantage of this program, in order to wipe the slate clean and begin to drive legally in the Garden State again. While our state has to do everything it can to collect funds owed to the people of New Jersey, the more important goal of this program is to encourage eligible drivers to restore their licenses,” said Senator Turner.

Drivers seeking more information on the program should visit: www.njmvc.gov/surcharge. 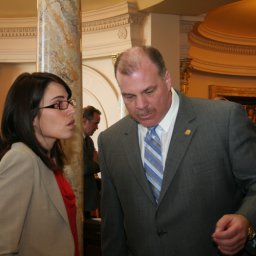 TRENTON – A bill sponsored by Senator Shirley K. Turner, Senate Majority Leader Steve Sweeney and Senator Teresa Ruiz which would establish a 60-day grace period for drivers with outstanding motor vehicle surcharges to pay those surcharges without facing interest or collection costs was approved by the Assembly Transportation, Public Works and Independent Authorities Committee yesterday by a vote of 10-1.

“Instead of perpetuating the status quo for drivers who have suspended licenses, New Jersey should be helping them wipe the slate clean and restore their driving privileges,” said Senator Sweeney, D-Gloucester, Cumberland and Salem. “At a time when we are actively trying to rebuild our State’s tattered economy, we need to make sure we have a mobile workforce able to travel to and from the jobs we’re trying so hard to create. This bill would give drivers a chance to make amends for past motor vehicle violations, and compete in our State’s recovering job market.”

TRENTON – A bill sponsored by Senator Shirley K. Turner which would establish a 60-day grace period for drivers with outstanding motor vehicle surcharges to pay those surcharges without facing interest or collection costs was approved by the Senate today by a vote of 39-0.

“At a time of global economic crisis, many drivers in the lowest income brackets simply cannot afford the death by a thousand cuts created by the fee and penalty scheme surrounding motor vehicle surcharges,” said Senator Turner, D-Mercer. “Unless we provide some sort of relief for these individuals, they will never dig themselves out of their debt to the State Motor Vehicle Commission. By creating an amnesty period from interest and collection fees associated with motor vehicle surcharges, we can give penalized drivers an option to wipe the slate clean, and raise needed funds for the State.”

TRENTON – A bill sponsored by Senator Shirley K. Turner which would establish a 60-day grace period for drivers with outstanding motor vehicle surcharges to pay those surcharges without facing interest or collection costs was approved by the Assembly Transportation, Public Works and Independent Authorities Committee yesterday by a vote of 10-1.

“Many New Jerseyans with suspended licenses are caught in a vicious circle,” said Senator Turner, D-Mercer. “They don’t have the money to pay off exorbitant motor vehicle surcharges in order to restore their licenses, and they can’t hold a job to make money to pay off their surcharges because they don’t have a reliable mode of transportation. Rather than trap New Jersey’s least fortunate citizens in an endless cycle of joblessness and ever-increasing surcharges, this bill cuts drivers a break, and will hopefully deliver a much-needed cash infusion to our very desperate State coffers.”