WEST ORANGE – A new law sponsored by Senator Loretta Weinberg which appropriates $40 million in voter-approved bond funding from the Garden State Preservation Trust” (GSPT) to the State Department of Environmental Protection for land conservation, was publicly signed today by Governor Jon Corzine at Turtle Back Zoo in West Orange.

“The beauty of this funding is that it will help preserve open space throughout the state,” said Senator Weinberg, D-Bergen. “As New Jersey’s population continues to grow, so will the amount of space necessary to house its residents. This new law will help ensure that future generations will enjoy New Jersey’s parks, beaches and other open spaces.”

Senator Weinberg’s legislation, S-2754, allows municipalities throughout the state to use the $40 million in funding for recreation and open space preservation.

The GSPT has been the funding source for New Jersey’s farmland preservation projects since 1999. The program is administered by the State Agriculture Development Committee, in the State Department of Agriculture, said Senator Weinberg.

“Specifically in Bergen County, this funding will help cover the cost of expanding the Highlands Greenway in Mahwah. and Oakland Boro, as well as work to expand non-profit youth camps in Mahwah, and to further develop urban parks in Edgewater Boro,” said Senator Weinberg. “New Jersey is known as the ‘Garden State’ and this funding will help make sure that the tradition continues.”

This law received final legislative approval on June 21, and became law on September 27. 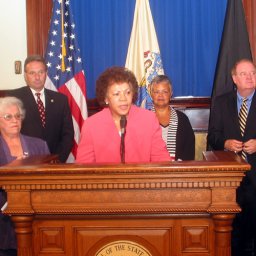 “New Jersey has a long, proud history of protecting our pristine open spaces from the constant pressure of development,” said Senator Turner, D-Mercer. “The Green Acres program allows us to combat sprawl while protecting some of our most environmentally sensitive areas to be enjoyed by generations to come.”

“New Jersey’s farmers work hard to grow exceptional produce that is not just enjoyed here in New Jersey, but also around the world,” said Senator Sweeney, D-Gloucester, Cumberland and Salem. “This program represents an investment in development and preservation for farmland throughout the state.”