TRENTON – A bill sponsored by Senator Jim Whelan which would create an alternative method of endorsing teachers in specific subject areas in order to address a shortage in those subject areas was unanimously approved by the Senate Education Committee today.

“If our kids are going to compete in a national or international marketplace, they have to have the fundamentals of education,” said Senator Whelan, D-Atlantic. “However, New Jersey is currently in the midst of a severe and worsening teacher shortage, particularly in the areas of science and math. In order to preserve the promise of a thorough and efficient education for all New Jersey students, we have to implement creative programs which increase the number of available math and science teachers without giving an inch on the need for quality teachers.”

The bill, S-1718, would establish, on a permanent basis, a number of the provisions of an 18-month pilot program developed in the Department of Education to address the State’s shortage of mathematics and science teachers. The bill would direct the Commissioner of Education to establish a program to issue subject area endorsements in math and the sciences – or any other subject area identified by the U.S. Department of Education as facing a shortage – to certified teaching staff members authorized to work in New Jersey public schools who do not currently hold such endorsements. Under the program, the State Board of Examiners would issue subject area endorsements to teaching staff members who pass the appropriate State test of subject matter knowledge and meet any other criteria as set by the Commissioner of Education through regulation.

Senator Whelan, who teaches in Atlantic City, noted that the current shortage of science and math teachers at the high school level is especially severe in urban communities. He said that the 18-month pilot program – which was created as a result of S-2707, a bill advanced during the 2008-2009 Legislative Session – has resulted in 80 new Physics teachers and 25 new Chemistry teachers in New Jersey, more than four times the number produced by all universities in New Jersey during that same time period. These new science teachers taught about 10,000 New Jersey students who may not have been able to study physics or chemistry without the pilot program.

“This program, in its pilot phase, has been an incredible success in expanding the availability of new math and science teachers, and meeting the growing demand as more and more experienced teachers retire,” said Senator Whelan. “If a qualified teacher demonstrates sufficient subject knowledge and a desire to teach, I don’t see any reason why the State shouldn’t give its full blessing. This program would make it easier for existing teachers to fill in the gaps whenever quality teachers are needed.”

The bill now heads to the Senate Budget and Appropriations Committee, before going to the full Senate for review. 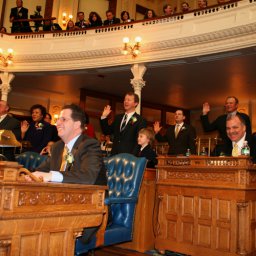 TRENTON – A bill sponsored by Senators Jim Whelan, Teresa Ruiz, and Shirley K. Turner which would create an alternative method of endorsing teachers in specific subject areas in order to address a shortage in those subject areas was approved by the Senate today by a vote of 36-0, receiving final legislative approval.

“We have a responsibility to our kids to make sure they receive a top-notch education in order to compete in an increasingly global marketplace,” said Senator Whelan, D-Atlantic. “However, when our schools are facing down shortages in key subject areas, not only is the quality of education jeopardized, the availability of even fundamental education comes into question. This bill would ensure that we have enough quality teachers at all levels and in all subject areas to meet the need, without compromising an inch on the quality of the education our kids receive.”

“This bill would make sure that New Jersey schools have access to a qualified and dedicated workforce whenever shortages in any subject area may arise,” said Senator Ruiz, D-Essex, and Chairwoman of the Senate Education Committee. “It would create an alternate path for subject area endorsements for teachers who demonstrate proficiency in any given subject and a desire to teach that subject. Ultimately, it would ensure that New Jersey is better-equipped to meet the demand for quality teachers in every school district and every educational discipline.”

“By giving our State’s teachers the ability to pursue alternate subject area endorsements, we’re making sure that we have adequate and available staffing in all educational disciplines,” said Senator Turner, D-Mercer and Hunterdon, and Vice Chair of the Education Committee. “This bill strikes a thoughtful balance between the staffing needs of our schools and the need for quality teachers in our classrooms. It will result in teachers filling in the holes whenever a district faces a shortage in a particular subject area.”