“With today’s bill signing, we are making sure that the gift of hearing is not out-of-reach for New Jersey children living with hearing loss,” said Acting Governor Codey. “No child should be without access to medically-necessary hearing aids, which are especially critical in the formative years when kids develop the skills to speak and communicate. This new law is about guaranteeing children a level playing field to succeed, and build the skills they need to do well in life.”

The bill, S-467 / A-1571, known as “Grace’s Law,” will require all health insurers in the State of New Jersey to provide coverage for medically-necessary hearing aids for children 15 years of age and younger. The bill requires insurers to provide this coverage every 24 months, and provide up to $1,000 per hearing aid. Under the bill, a covered individual could opt for a hearing aid priced higher than the maximum payable benefit, but would have to pay the difference.

“The signing of this law will give New Jersey’s hearing impaired children a fair chance to reach their full developmental and educational potential,” said Senator Barbara Buono, D-Middlesex, a prime sponsor of the bill in the State Senate.

“Principal credit for enactment of this important legislation belongs to Grace Gleba, who advocated for all hearing-impaired children in New Jersey,” said Senator Leonard Lance, R-Hunterdon and Warren, and a sponsor of the bill in the Senate. “We are very proud of Grace and grateful for her sense of civic duty at such a young age.”

According to national health care statistics, two or three of every thousands babies nationwide are born with partial hearing loss, making it the number one birth defect in America. If not treated early, hearing loss can impede speech, language and cognitive development, which can result in significant educational delays and increased educational costs. Research has indicated that children with unilateral hearing loss – which is defined as hearing loss in one ear – are ten times more likely to be held back at least one grade compared to children with normal hearing. Other reports show that detecting and treating hearing loss at birth saves $400,000 per child in special education costs by the time that child graduates from high school.

“The treatment of hearing loss in children with hearing aids is not a luxury,” said Assembly Speaker Joseph J. Roberts Jr., D-Camden, and prime sponsor in the General Assembly of “Grace’s Law.” “It’s unimaginable that insurers can effectively deny hearing-impaired children the opportunity to learn to hear, speak and communicate like everyone else.”

“Hearing aids are a vital first step in treating hearing loss,” said Assemblyman Herb Conaway (D-Burlington), a practicing physician, and a sponsor in the Assembly. “Moreover, they can make a major difference in a child’s education and ability to understand speech in the critical early years.”

Acting Governor Codey and the bill sponsors noted that hearing aid coverage for children is especially important because children out-grow hearing aids frequently, making replacement hearing aids necessary. For families, the expense of a new hearing aid or set of hearing aids every other year may be too much to bear.

The bill is named after 9-year-old Grade Gleba, of Washington Township in Warren County. Grace, along with her mother Jeanine, has lobbied and testified in Trenton on the need for the bill. Grace, who was born with congenital hearing loss, has been using hearing aids since she was 3 months old, and as a result, has developed excellent speaking skills, good grades, and has even participated in her school choir.

“I want to personally thank Grace and the entire Gleba family for their years of advocacy on behalf of children with hearing loss,” said Acting Governor Codey. “Grace’s tenacity, and her own example of what children can achieve with the proper treatment for hearing loss, are a major reason why kids in New Jersey will be able to receive the gift of hearing for years and years to come. Grace and her family have taken personal adversity, and turned it into something positive for the people of New Jersey. We all owe her a debt of gratitude.”

The bill received final legislative approval earlier in the month. It will take effect 90 days after today’s enactment.

“Partial hearing loss is the number one birth defect in America. Fortunately, hearing aids can help to minimize the adverse affects of hearing loss when used at an early age,” said Senator Buono, D-Middlesex. “No child should go without the benefits of a hearing aid because their parents’ insurance refuses to pay.”

“Partial hearing loss is the number one birth defect in the U.S. today, and if not treated at an early age, can slow down a child’s development speech, language and cognitive abilities,” said Senator Buono, D-Middlesex and Chair of the Committee. “A thousand dollar hearing aid purchased today can help to avoid costly special education services later on in life, saving hundreds of thousands of dollars down the road. From a medical, financial and humanitarian perspective, providing a hearing aid is a no-brainer.”

(TRENTON) – With hundreds of thousands of New Jersey households – including numerous constituents – still without power after Superstorm Sandy, Senator Shirley K. Turner today said it is past time to require power companies to file comprehensive emergency response plans with state officials to ensure the timely restoration of power.

Turner drafted the legislation in 2011 after Tropical Storm Irene left countless homes dark for days, exposing the weakness that utility companies were not equipped to handle extensive outages in the aftermath of such a destructive storm.

“For too many of our residents, their experiences after Hurricane Sandy is déjà vu,” said Turner (D-Mercer/Hunterdon). “If we had learned our lesson from last year, this year’s work to restore power would be organized and orderly with clear-cut deadlines and benchmarks, not another disjointed scramble. Ten days or more without power is too much to ask of our residents, especially senior citizens, disabled residents, and families with children. We need sound emergency plans in place to prevent these extensive outages in the future.” 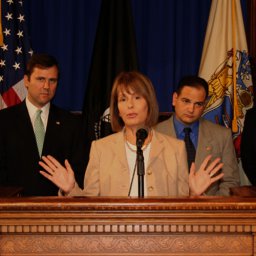 “Children should not be forced to due without hearing aids because the costs are too high to pay out of pocket and insurance companies refuse to cover the expense,” said Senator Buono, D-Middlesex. “By requiring insures to cover the expenses, we can reduce the long-term costs of care for our children, and help improve their quality of life.”

TRENTON � A measure sponsored by Senators Barbara Buono and Fred H. Madden, which would require health care providers to cover the cost of hearing aids for children age 15 and younger was unanimously approved today by the full Senate.

�When left undiagnosed and untreated in children, hearing loss can impede the development of speech, language and cognitive development,� said Senator Buono, D-Middlesex. �These developmental delays can cause a need for costly special education services later on in life. By calling upon health insurers to cover the cost of hearing aids for kids, we are renewing our commitment to the growth and educational success of New Jersey�s children.�