TRENTON – Legislation sponsored by Senators Jim Beach (D-Camden) and Fred Madden (D-Gloucester, Camden) that would prohibit an employer or an employer’s agent, representative or designee from advertising a job vacancy that disqualifies unemployed individuals from applying was signed into law today.

“For the countless residents who lost their jobs through no fault of their own, these ads just add insult to injury, especially when they see an opening for which they would be a perfect fit,” said Beach. “Businesses that make it a point to exclude the unemployed from consideration are not only passing up on the chance to attract qualified candidates, but are only making the employment picture worse for the entire state.”

“Why on earth would we want to discriminate against those who have been out of work and need a job,” said Madden, Chairman of the Senate Labor Committee. “Our aim is to get people back in the workforce, not block them from doing so. This will mean fewer people collecting unemployment benefits, more job opportunities and more disposable income in the pockets of New Jerseyans.”

Under the new law, violators are subject to a civil penalty of $1,000 for an initial violation, $5,000 for a second violation, and $10,000 for each subsequent violation. The fines will be collected by the Commissioner of Labor and Workforce Development.

The legislation addresses the growing number of job listings that disqualify unemployed individuals from applying. This practice has become increasingly common as the country labors to recover from historically high unemployment, particularly here in New Jersey. Employers that discriminate against the unemployed when hiring are contributing to the unemployment problem and effectively creating obstacles to economic growth and recovery.

Employers believe that by interviewing employed candidates only, they will be able to weed out weaker candidates. But they may actually be missing out on some of the best and most qualified potential candidates by doing this. In addition, this practice discriminates against victims of downsizing and failing companies, young people who are new to the workforce, fathers and mothers who have left the workforce temporarily to care for their children, and many other groups. 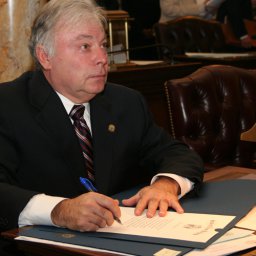 Beach said the bill would ensure that a person’s qualifications – and not whether they had been a victim of the economic recession that doubled unemployment rates – would remain the most important criteria for job seekers.