TRENTON -A bill sponsored by Senators Joseph Coniglio and John A. Girgenti which will aid members of the New Jersey National Guard by exempting them from income tax on housing and subsistence allowances became law today.

“Our men and women in the National Guard and the reserves sacrifice a great deal at home to fight for our country,” said Senator Coniglio, D-Bergen, the Chairman of the Senate State Government Committee. “Currently, when guard members are called to active duty the State provides housing and subsistence allowances to recognize the hardship that full-time active duty can have on a person’s life. We should exempt those allowances from the income tax, so that the intention of the housing and subsistence allowances are met.”

The enacted bill, S-250, provides a New Jersey income tax exclusion for the housing and subsistence allowances that New Jersey Guard members receive while on State active duty. Currently, these allowances are taxable when the National Guard is called into active duty by the Governor for emergencies, but are not taxable when serving under U.S. Department of Defense orders or Executive Orders from the President of the United States.

“We need to show our National Guard volunteers that New Jersey appreciates their service, whether they are serving under orders of the Governor or the President of the United States,” said Senator Girgenti, D-Bergen and Passaic, the Chairman of the Senate Law, Public Safety and Veterans’ Affairs Committee. “There is a difference in the benefits for federal and State active duty soldiers, but National Guard members provide the same services, and should be granted the same benefits.” 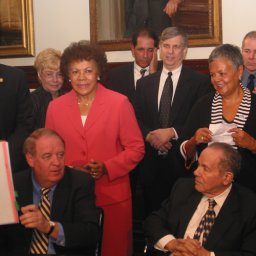 TRENTON – A comprehensive package of ethics reform bills sponsored by Senate President Richard J. Codey were signed into law today by Governor Corzine. The bipartisan measures focus strongly on ethics training and education for the legislative branch and build on recent efforts to create greater transparency and efficiency in government.

“These bills are part of our ongoing effort to restore the public’s faith in government,” said Sen. Codey (D-Essex). “Mandatory ethics education and training will help avoid conflicts of interests and build on our efforts to create a more open and transparent government. It is essential that the public have confidence in our decision making.”