TRENTON – A measure sponsored by Senator Sandra Bolden Cunningham which would allow companies to take certain Business Employment Incentive Program (BEIP) grants to be taken as tax credits against their Corporation Business Tax (CBT) liability was unanimously approved today by the full Senate.

“This bill would allow companies to decide for themselves how to best utilize their BEIP grant dollars,” said Senator Cunningham, D-Hudson. “High taxes can place a significant financial strain on small businesses, and by allowing them the choice of how to use the funding, they can select the method that best suits their financial needs.”

Senator Cunningham’s bill, S-265, would allow employers that are part of the BEIP program to opt to receive their incentive payments as a CBT credit as opposed to a direct grant. In the event that the amount of the BEIP grant is higher than the CBT amount, the company would receive the remaining money as a tax refund.

“The goal of the tax credits is to encourage business growth, which would lead to increased economic vitality and expansion of the State’s job market. This bill is good for residents, business owners and the State economy,” said Senator Cunningham.

Grant amounts range between 10% and 80% of the total amount of State income taxes paid by newly hired employees.

This measure now heads to the Assembly for approval.

TRENTON – The Assembly Consumer Affairs Committee today unanimously approved a measure sponsored by Senators Paul A. Sarlo and Loretta Weinberg that would require child care facilities to remove all unsafe or recalled items from their centers.

“As the father of two young sons I know how important it is for parents to monitor their kids’ toys, to help ensure that they are safe and will not pose a threat to their children’s safety or well-being,” said Senator Sarlo, D-Bergen, Essex and Passaic. “Child safety is a serious issue. If a product has been found to pose a threat to our children, daycare centers must make it a priority to make sure that the item is removed so that kids don’t get hurt.”

TRENTON – Legislation sponsored by Senators Loretta Weinberg and Paul A. Sarlo, to require child care facilities to remove from their centers all unsafe or recalled items, was unanimously approved by the full Senate today.

“Parents and child care workers assume that the toys their children are playing with must be safe, because they are sold on store shelves,” said Senator Weinberg, D-Bergen. “Consumers rely on the manufacturers to make sure that they make their products safe, but each year many products are recalled. We must be sure that our children are protected from these dangerous toys by requiring any unsafe products to be removed from our day care centers.” 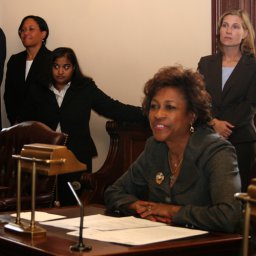 TRENTON � A measure sponsored by Senator Sandra Bolden Cunningham which would allow certain Business Employment Incentive Program (BEIP) grants to be taken as tax credits against their Corporation Business Tax (CBT) liability was approved today by the Senate Budget and Appropriations Committee.

�By giving companies a choice of how they receive their BEIP grants, they will be able to decide for themselves how to best utilize the funding,� said Senator Cunningham, D-Hudson, who sits on the Senate Budget Panel. �Often taxes put such a significant financial strain on businesses � especially small businesses, and this bill would allow them to choose method that works best for them.�