“Gangs are running rampant on the streets of Jersey City and other urban centers in New Jersey, and kids are forced to either enter gang life, or face the consequences,” said Senator Doria, D-Bayonne. “While I think we’ve been successful in putting a focus on this problem, we need to do more to discourage gang violence, and give kids a positive alternative.”

Senator Doria has introduced three bills which are intended to alleviate gang violence in New Jersey cities. The first, S-755, would allow municipalities to enact local ordinances to curb gang-related loitering and criminal activity. The legislation would give local officials the power to push strict local laws banning gang assembly on the streets.

“In many cases, local officials are the best qualified to deal with the unique gang problems going on in their cities,” said Senator Doria. “This legislation will empower those officials to crack down on gangs while providing the necessary flexibility for ordinances to be tailored to local needs.”

The second bill in the package, S-2310, would establish a Statewide crime of participation in a street gang initiation ritual. Under the bill, a person could face enhanced penalties for a number of already-illegal activities, if it is found that the person committed their crime in order to join or actively participate in a gang initiation.

“We need tough penalties in order to discourage crimes committed to impress gang leaders,” said Senator Doria. “Too many of our kids get drawn into a life of crime because they have to join the gang to survive life on the streets. However, we need to take a hard line against any illegal activities that steer our kids down the wrong path.”

The final bill, S-2341, would prohibit individuals from purchasing more than one handgun in a calendar month. Senator Doria noted that gangs often take advantage of “straw purchasers,” who legally buy as many guns as possible, and sell them illegally to arm the gang for their criminal activities.

“We know that ‘straw purchasing’ goes on in many of our urban areas, and we need to slow the flow of guns into the hands of criminals,” said Senator Doria. “This provision is a common-sense approach to crack down on ‘straw purchasing,’ and hopefully take some of the lethality out of street gangs in New Jersey.”

Senator Doria noted that his proposals, which focus on the consequences of gang life, cannot succeed without a concerted effort, on the part of local youth services groups, to provide kids with a safe alternative to gang life.

“For many, gang life is not a choice, but rather a harsh reality of life in urban America,” said Senator Doria. “While we need to do everything we can to show that there are very real consequences to participating in a gang, we also need to provide an outlet for kids – a safe haven so they don’t feel they have to turn to the gang to get by. I will be working with agencies in the Bayonne and Jersey City area to promote such programs which keep kids off our streets and out of gangs.” 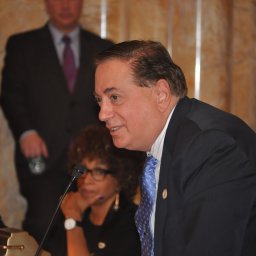 TRENTON – Legislation sponsored by Senator Nicholas J. Sacco that would set forth specific guidelines to be followed by law…