TRENTON – A bill sponsored by Senate Commerce Committee Chairwoman, Senator Nia H. Gill, which would require insurers regulated by the State of New Jersey to make installment payments for maternity services in the Garden State was unanimously approved by the Commerce Committee today.

“Under the current payment rules, ob-gyns are the only medical professionals I know of in New Jersey, who are not paid for the services they provide,” said Senator Gill, D-Essex and Passaic. “Rather, these health care professionals are only paid by the patient’s health insurance after the baby is delivered. This bill would change that system, and would make sure that licensed ob-gyns and midwives could receive payment for services provided throughout a patient’s pregnancy.”

The bill, S-1125, would require all health insurers regulated by New Jersey to provide reimbursement in installments to an obstetrical provider licensed in New Jersey. The bill defines obstetrical providers as State-licensed obstetricians, gynecologists and midwives that are subject to State licensure or certification through the Board of Medical Examiners. Senator Gill noted that the bill does not issue specific requirements for installments payments, and that such details would be determined through regulation by the Department of Banking and Insurance.

Senator Gill added that under current regulations, the total cost of caring for a pregnant woman and her baby – estimated at between $2,500 and $3,000 – is not paid out until after the baby is delivered, meaning that an ob-gyn may provide up to nine months of care before receiving any payment from a patient’s insurance provider. If a woman suffers a miscarriage, is transferred to a specialist as a result of a high-risk pregnancy, or moves out of State before the baby is delivered, and transfers to another doctor, the original ob-gyn may receive no payment for the services provided, other than the co-pays paid by the patient. Senator Gill said that by changing to an installment plan for maternity services, these health care professionals could receive payment for services rendered.

“New Jersey has the unenviable distinction as having among the highest infant-mortality rates in the nation,” said Senator Gill. “As a result, many ob-gyns may provide top-notch maternity services to a patient, only for the expecting mother to lose her baby or change doctors, and insurers aren’t covering the services already provided. By moving to installment payments for maternity services, we are creating a fairer business environment for licensed obstetrical providers, and making it easier for ob-gyns to operate in the Garden State.” 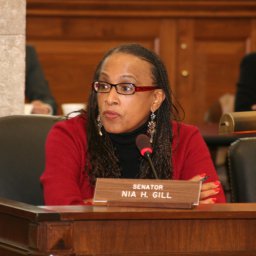 TRENTON – A bill sponsored by Senate Commerce Committee Chairwoman, Senator Nia H. Gill, which requires insurers regulated by the State of New Jersey to make installment payments for maternity services in the Garden State was signed into law today by Governor Corzine.

“The previous insurance reimbursement rules for maternity services performed in New Jersey were absurd, and forced medical professionals to administer care without any guarantee of ever being paid for their work,” said Senator Gill, D-Essex and Passaic. “Rather, health care professionals were only paid for their hard work after a baby was delivered. By going to a system of installment payments for maternity services, we are creating a far fairer system in the Garden State, and will hopefully make it easier for talented maternity care specialists to practice their medicine in New Jersey.”

TRENTON – A bill sponsored by Senate Commerce Committee Chairwoman, Senator Nia H. Gill, which would require insurers regulated by the State of New Jersey to make installment payments for maternity services in the Garden State was approved by the Senate today by a vote of 39-0.

“The current insurance reimbursement rules for maternity services in New Jersey allow medical professionals to administer services without ever being paid for those services,” said Senator Gill, D-Essex and Passaic. “Rather, under the current rules, health care professional who perform maternity services are only paid by the patient’s health insurance after the baby is delivered. That seems absolutely unfair to the professionals who do everything in their power to ensure a healthy delivery, and through this legislation, we would make sure that insurers reimburse ob-gyns and midwives throughout the course of a patient’s pregnancy.”