TRENTON – The Senate Health, Human Services and Senior Citizens Committee approved legislation today sponsored by Senators Ellen Karcher and Joseph Vitale that would authorize the Division of Youth and Family Services (DFYS) to conduct more extensive background checks on resource families before placing a child with that family.

“As much as we need to bring more resource families into New Jersey’s child welfare system, we need to make sure that there is no history of child abuse with those individuals, either in New Jersey or other states,” explained Senator Karcher, D-Monmouth and Mercer. “We cannot cut corners when it comes to health and safety of New Jersey’s children and expanded background checks will help us to weed out more unqualified applicants.”

“It has become clear in the past few years that the State needs to do more to ensure that foster children are placed with stable, safe resource families,” said Senator Vitale, D-Middlesex. “As we saw in the death of Xavier Jones in 2006, it is critical that we make sure that all adults living with a foster child are safe and responsible, not just the resource parents. Thorough background checks need to be conducted on all of the adults.”

Xavier Jones was a 21-month-old in the foster care system who died on June 7, 2006 after ingesting methadone prescribed to an adult child of the resource parent. The Office of Child Advocate determined in its review of the death that DFYS did not know that another adult was living in the home or that they were prescribed methadone and that the death could have been prevented.

Additionally, the bill would amend current law to give resource families the right to be heard at hearings involving children under their care.

The bill was approved by a vote of 8-0 and now goes to the full Senate for approval. 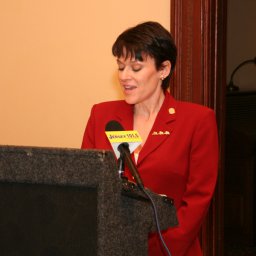 TRENTON – The Senate approved legislation today sponsored by Senators Ellen Karcher and Joseph Vitale that would authorize the Division of Youth and Family Services (DFYS) to conduct more extensive background checks on resource families before placing a child with that family.

“The safety and well-being of New Jersey’s foster children must be DFYS’s top priority,” said Senator Karcher, D-Mercer and Monmouth. “Before any child is placed with a resource family, the most thorough background check possible must be conducted on every adult living in the home of that family. We cannot afford to cut corners on these checks.”