TRENTON – A state constitutional amendment sponsored by Senate President Steve Sweeney and Senator Shirley K. Turner that would ensure judges contribute their fair share towards their pensions and benefits today cleared the Legislature, putting the measure on the November ballot.

“Judges should not be considered different than anyone else in public service terms of their pension and benefit contributions,” said Sweeney (D–Gloucester, Salem, Cumberland). “In fact, the poor health the judicial pension system is largely due to judges contributing so little while collecting greater benefits, and we can’t allow this system – or any pension – to go bankrupt. We need to correct this out of fairness and out of the need to put our fiscal house back in order.”

“The law should apply equally to everyone. No one is better than anyone else,” said Turner (D–Mercer, Hunterdon). “The pension reform law is critical to returning our pension systems to health and the ability to deliver on their promises. With the Judicial Retirement System in such poor shape, our judges need to swallow hard and take their medicine, or else run the very real risk of seeing their pension system run aground.”

The legislation, SCR-110, puts to voters a constitutional amendment that would clarify the Legislature’s authority to enact laws that deduct contributions from the salaries of Supreme Court Justices and Superior Court Judges to help fund their employee benefits, which include their pension and health care coverage.

The constitutional amendment is being proposed in response to a recent court case, DePascale v. State of New Jersey, in which the state Supreme Court decided that sitting judges do not have to make increased pension or health care contributions, as other state employees do under reforms passed last year to ensure the long-term viability of the system.

Specifically, the amendment would change language to Article VI, Section VI, paragraph 6, of the state constitution, and clarify that benefit contributions may be deducted from justices’ and judges’ salaries during their terms. It would take effect immediately upon approval by the voters, and make the higher benefit contribution requirements of the recent benefit reform law applicable to all current and future justices and judges.

Currently, the Judicial Retirement System carries a $280.5 million unfunded liability – making it the most unstable of the state’s public employee pension systems, able to meet only 52.1 percent of its obligations.

The Senate voted 28-0 to put the question to the voters, with the Assembly quickly following to give its approval.

Turner: Pension Reforms Must Apply Equally To All

TRENTON – Senator Shirley K. Turner today said the Supreme Court ruling that pension reforms enacted last year do not constitutionally apply to judges’ pension means it must be left to the voters to ensure the law applies equally to all public employees.

Turner is prime sponsor – along with Senate President Steve Sweeney – of a proposed constitutional amendment (SCR-110) that would ensure that judges pay the higher contribution rate needed to help stabilize their pension system and prevent its bankruptcy. Currently, the Judicial Retirement System carries a $280.5 million unfunded liability – making it the most unstable of the state’s public employee pension systems, able to meet only 52.1 percent of its obligations. 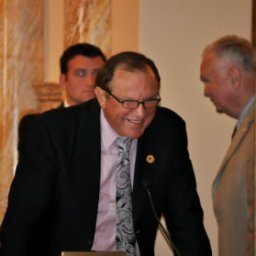 TRENTON – State Senator Raymond J. Lesniak, D-Union, a member of the Senate Judiciary Committee, issued the following floor remarks in support of a measure which would post a ballot question to the electorate to give the Legislature the authority to legislate judicial pension contributions:

“I’ve sponsored three amendments to the NJ Constitution during my time in the Legislature. As an Assemblyman, I sponsored a change in the riparian rights section of our Constitution. That amendment was not adopted by the voters. As a senator, I co-sponsored with Senator Lance a limit on borrowing without voter approval. That amendment was approved by our voters. And just last year, I sponsored the sports betting amendment that was overwhelmingly approved by our voters as well. I guess I could say Two Out Of Three Ain’t Bad.

TRENTON – Senator Richard J. Codey, D-Essex/Morris, issued the following statement today after the Senate approved a measure which would propose a Constitutional Amendment to the voters to allow the Legislature to legislate employee benefits for judges and justices of the Supreme Court:

“When employees think about their annual salary, they don’t often calculate out the cost of their fringe benefits and the deductions from their paycheck that go to pay for those benefits. Their salary is their salary, and any tax or benefit deductions are usually only reserved for the top portion of their pay stub.