TRENTON – A pair of bills sponsored by Senate Economic Growth Committee Chairman Raymond J. Lesniak which would begin to address New Jersey’s foreclosure crisis by creating an expedited process for foreclosure on abandoned, dilapidated properties, and by creating a mechanism to transform abandoned properties to affordable and market-rate housing was approved by the Committee yesterday.

The bills represent different aspects of S-1566, legislation Senator Lesniak introduced earlier this year which was vetoed by Governor Christie.

“I believe the Governor should reconsider this important legislation and have streamlined the process to hopefully address his concerns,” said Senator Lesniak, D-Union. “The foreclosure crisis in New Jersey is driving down residential property values, causing urban and suburban blight, contributing to increased crime rates, and exacerbating itself by making homes surrounding an abandoned, dilapidated property all but unsellable. We need to take action on this crisis, and begin to turn foreclosed, abandoned properties into affordable homes for New Jersey’s middle class.

“The original legislation had a broad cross-section of supporters, from bankers to realtors to builders and housing advocates,” added Senator Lesniak. “We were able to get the Sierra Club, the League of Municipalities and the Mortgage Bankers Association of New Jersey to support the bill. Such diverse groups don’t come together for just any piece of legislation, and hopefully the Governor joins us in our efforts to combat the foreclosure crisis in New Jersey.”

The first bill, S-2156, which was approved by a vote of 5-0, would establish an expedited foreclosure procedure for abandoned residential properties which have fallen into disrepair. Under the bill, lenders would be able to bring summary actions to foreclose mortgages on vacant and abandoned residential property, and the court would be able to enter a final residential mortgage foreclosure judgment if it finds clear and convincing evidence that the property is not occupied by the mortgagor or a tenant, and at least two of the following conditions:

• the accumulation of newspapers, circulars, flyers or mail on the property;

• disconnected gas, electric or water utility services to the property;

• the accumulation of junk, litter, trash or debris, or hazardous, noxious or unhealthy substances or materials on the property;

• the absence of window treatments such as blinds, curtains or shutters;

• the absence of furnishings or personal items;

• statements of neighbors, delivery persons or government employees indicated that the residence is vacant and abandoned;

• windows or entrances that are boarded up or multiple window panes that are damaged, broken or unrepaired;

• doors to the property that are smashed through, broken off, unhinged, or continuously unlocked;

• a risk to the health, safety, or welfare of the public, or any adjoining or adjacent property owners, as a result of vandalism, loitering, criminal conduct or physical destruction or deterioration of the property;

• an uncorrected violation of municipal building, housing or similar codes during the preceding year;

• a written statement issued by the mortgagor expressing the clear intent to abandon the property;

• or any other reasonable indicia of abandonment.

The bill would not apply if there is an unoccupied building which is undergoing construction, renovation or rehabilitation that is proceeding diligently, if the building is occupied on a seasonal basis but otherwise secure, or if the building is secure, but subject to a probate action, or other ownership dispute. If the court makes a finding in the foreclosure judgment that the property is vacant and abandoned, the sheriff would be required to sell the property within 75 days of receiving the writ of execution from the court.

Senator Lesniak said that the goal of this legislation is to transform a process which can take over a year in most foreclosure cases, and compact it to a few months for abandoned properties which have fallen into disrepair.

“Not only are many of these abandoned properties an eyesore to the surrounding community, but they represent a danger to public health, creating a breeding ground for criminal activity and unsafe, unhealthy conditions,” said Senator Lesniak. “If a property has been abandoned by its owner, and the owner has let the property fall into such a state of disrepair that it represents a blight on the community, then the court should be able to step in so we can turn these properties around.”

The second bill in the package, S-2157, which was approved by a vote of 3-2, would require the New Jersey Housing and Mortgage Finance Agency (HMFA) to facilitate and finance the purchase of foreclosed residential properties from institutional lenders, and dedicate such properties as affordable housing units or market-rate housing. HMFA would be able to use its bonding authority – without recourse to the state – federal funds and funds from the State Affordable Housing Trust Fund to finance the purchase of foreclosed homes by for-profit and not-for profit corporations. Some properties could be deed-restricted with the consent of the affected municipality, to be used as affordable housing. The bill would also create incentives for municipalities to transition abandoned properties to affordable housing on their own, giving them a 2-to-1 match against their affordable housing obligation for affordable units created from foreclosed properties using funds from municipal affordable housing trusts. Under estimates from the original bill, Senator Lesniak said this bill could result in over 10,000 new affordable and market-rate units and over 10,000 less unoccupied, boarded-up properties.

“This bill is at the core of the effort to mitigate New Jersey’s foreclosure crisis,” said Senator Lesniak. “It would create a legitimate mechanism to boost the number of available affordable housing units, it would create new market-rate housing, and it would do it while cleaning up blighted, abandoned properties within our municipalities. It doesn’t get any better than that.”

TRENTON – A bill sponsored by Senator Raymond J. Lesniak which would create an expedited process for lenders to foreclose on abandoned, dilapidated properties was approved by the Senate today by a vote of 35-2. The measure is part of a larger legislative package sponsored by Senator Lesniak to address New Jersey’s foreclosure crisis.

“New Jersey is second-worst in the nation – behind only Florida – in the number of seriously delinquent home loans which are at risk of foreclosure,” said Senator Lesniak, D-Union. “The worsening foreclosure crisis is exacerbated by the number of homes which sit abandoned, awaiting official foreclosure action, and reducing residential property values in the surrounding area in the meantime. Through this legislation, we hope to reduce the timetable for turning these homes around, reducing urban and suburban blight and transforming these properties into livable homes.” 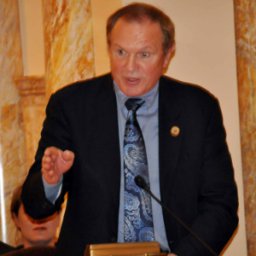 TRENTON – A bill sponsored by Senator Raymond J. Lesniak which would create an expedited process for lenders to foreclose on abandoned, dilapidated properties was approved by the Assembly today.

“New Jersey is second-worst in the nation – behind only Florida – in the number of seriously delinquent home loans which are at risk of foreclosure,” said Senator Lesniak, D-Union. “The worsening foreclosure crisis is exacerbated by the number of homes which sit abandoned, awaiting official foreclosure action, and reducing residential property values in the surrounding area in the meantime. Through this legislation, we hope to reduce the timetable for turning these homes around, reducing urban and suburban blight and transforming these properties into livable homes.”