CAMDEN – A bill sponsored by Senators Dana L. Redd and Brian P. Stack which permits county governments to create trust funds in order to provide assistance to homeless New Jerseyans living within the county was signed into law today by Governor Corzine.

“Particularly in this difficult economy, many New Jersey residents are falling through the cracks, unable to make ends meet,” said Senator Redd, D-Camden and Gloucester. “Many of these folks find themselves living on the streets, victims of the economic downturn and unable to find a helping hand. Now, thanks to today’s bill signing, I can say unequivocally to those who are suffering in the night that help is on the way.”

“I know in my community that we’re stretching every social services penny to the limit to provide assistance to folks who’ve fallen on hard times,” said Senator Stack, D-Hudson. “However, we’ve seen that one agency or one community cannot do it alone, especially when it comes to meeting the overwhelming needs of the homeless in New Jersey. This new law allows counties to create the infrastructure to partner with municipalities and non-profit agencies to create a better safety net for the homeless living in the Garden State.”

Under the Senators’ bill, S-2354, county boards of freeholders are authorized to adopt a resolution imposing a $3 surcharge on all documents recorded by county officials. The money collected through these surcharges would be deposited in a trust fund, and could only be used for providing services including rental assistance, housing project construction and rehabilitation, and for social services to assist the homeless population within the county. Any monies not utilized within four years will be transferred to the Department of Community Affairs, which will then contract with a community-based organization within the respective county to aid the homeless living within the county.

Counties that create the Homelessness Trust Funds will be required to provide information concerning the usage of funds to the State Housing and Mortgage Finance Agency.

“This bill represents government’s most sacred responsibility – to care for those who are unable to care for themselves,” said Senator Redd. “We cannot turn a blind eye to the plight of the homeless in our cities and around the State. Through this law, we’re giving New Jersey’s 21 counties the authority needed to help out homeless citizens within their borders in their time of greatest need.”

“As so many New Jersey residents struggle to find a foothold in an uncertain economy, its our obligation to provide compassionate, meaningful assistance to those people who can’t make ends meet,” said Senator Jim Beach, D-Camden, a co-sponsor of the bill who attended today’s bill signing ceremony at Cathedral Kitchen. “I’m proud to have worked with Senators Redd and Stack to create a funding mechanism to help our most vulnerable citizens get back on their feet. This new law is about creating second chances for people who have nowhere else to turn for help.”

In addition, a separate piece of legislation, also sponsored by Senator Redd, which allows taxpayers to make voluntary contributions on their income tax returns to the Community Food Pantry Fund and to the Cat and Dog Spay/Neuter Fund, was also signed into law today.

Both bills were approved by both Houses of the Legislature in June. 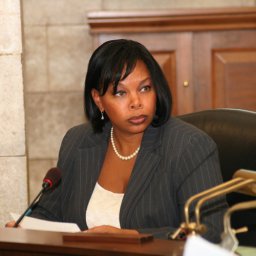 TRENTON – A bill sponsored by Senators Dana L. Redd and Brian P. Stack which would permit county governments to adopt homelessness housing plans to address the housing needs of the homeless within their municipalities has been approved by the Senate today by a vote of 30-6.

“As the global economic crisis continues to have a major impact on the communities and neighborhoods of New Jersey, unfortunately more State residents are unable to make ends meet,” said Senator Redd, D-Camden and Gloucester. “With unemployment and homelessness rates on the rise, we have to do something to make sure that the most vulnerable people within our communities get the food and shelter they need to survive. We cannot turn our backs on the plight of the homeless, and must do everything we can to make sure they get the basic services they need to get by.”

CAMDEN – A bill co-sponsored by Senator Joseph F. Vitale which permits county governments to create trust funds in order to provide assistance to homeless New Jerseyans living within the county was signed into law yesterday by Governor Corzine.

“At a time of nearly unprecedented economic crisis, New Jerseyans are finding themselves unable to keep their heads above water, and many require a helping hand just to get by,” said Senator Vitale, D-Woodbridge, and Chairman of the Senate Health, Human Services and Senior Citizens Committee. “This new law extends that helping hand, providing needed funding for social services programs specifically intended to help the State’s homeless citizens. We cannot turn our backs on State residents struggling to make ends meet, and this law ensures that we have the resources to help when our help is needed the most.”