The measure, SCS-559/757, would tighten the use of eminent domain, would address concerns about the definition of property in need of redevelopment, would require fair compensation if eminent domain is the only option, and would maintain transparency during the process.

“For years I have been meeting with and listening to homeowners, the business community, non-profit organizations, representatives of local governments, environmentalists, and so many others to hear their side of the eminent domain argument. After much debate and compromise I feel that we have a fair and equitable bill to address the need to redevelop and the right of owners to keep their properties.”

“We need to understand that redevelopment is in the economic best interest of our State. In most cases, communities that have used eminent domain to redevelop have created new affordable housing and job opportunities. It would be a mistake to change the law in a way that makes the redevelopment process so cumbersome and expensive that towns become economically stagnant, unable to bring in new investors into their community.

“The vast majority of redevelopment projects in the State do not rely on the use of eminent domain, but if we ban the use of it outright, we will do a huge disservice to our State.”

TRENTON – A bill sponsored by Senator Bob Smith to study the impact of global warming on New Jersey’s water supply, tourism industry and agricultural products was approved today by the Senate Environment Committee and sent to the full Senate for a floor vote.

“New Jersey has to adjust to the climate change over the years because it will have an impact on our natural resources, our recreational activities and our need for energy sources,” said Senator Smith, the Chairman of the Senate environment panel. 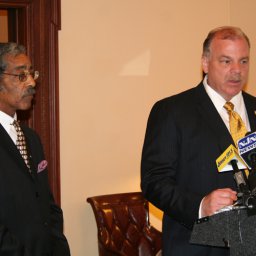 TRENTON – Senate Majority Leader Steve Sweeney, D-Gloucester, Cumberland and Salem, today released the following statement on his efforts along with Senator Ronald L. Rice to protect property owners from abuse of the power of eminent domain by government.

The measure, SCS-559/757, is a collaborative effort of Senator Sweeney and Senator Rice, D-Essex and is the result of a merger of their two separate bills. It would incorporate into law recent court decisions that toughen standards that govern the ability of towns and cities to take private property. It enhances notice requirements for property owners and renters subject to eminent domain, while increasing transparency. The compromise measure greatly increases financial assistance provided to displaced tenants and businesses. And, it would “sunset” the authority for a municipality or redevelopment agency to exercise eminent domain after five years unless the municipality acts to extend this authority.