TRENTON – Senator Nicholas Sacco today said a report that an NJ Transit employee was allegedly texting while operating a train shows the clear need for legislation he sponsored which will impose severe penalties on any public transportation operator caught texting or talking on a cell phone while behind the wheel of a bus or at the controls of a train.

“We know that texting while driving is extremely dangerous, but doing it when the lives of so many people are at stake is completely inexcusable,” said Senator Sacco (D-Hudson/Bergen). “This incident demonstrates the clear need for hefty penalties to ensure that transit operators understand there will be severe consequences for this type of reckless behavior.”

The alleged texting incident recorded with a cell phone video camera by an NJ Transit Newark Light Rail rider shows the operator touching a cell phone keypad while looking down as the train moved along the tracks. The news story, published earlier this week on NBCNewYork.com, indicated the operator was suspended indefinitely without pay.

“I’m glad that once NJ Transit officials became aware of the incident, they took quick action to remove the operator. But as far as I’m concerned, this shouldn’t have happened at all,” said Senator Sacco. “Thousands of bus and train riders rely on public transportation to get them to work and school each day. At the very least, they should be assured that vehicle operators are following the proper procedures to ensure they get to their destinations safely. Clearly, that isn’t the case.

“With this legislation, we will send a strong message that texting while operating a public transit vehicle is unacceptable. Hopefully, the threat of jail time and a hefty fine will make operators think twice about pulling out their cell phones while on duty.”

Sacco’s legislation (A-407/S-732), which is also sponsored by Senator Brian Stack (D-Hudson), would make it a disorderly person’s offense for public transit operators – including light rail and bus drivers – to talk or send text messages via a cell phone or other electronic communication device while the vehicle is in motion. Violators would be subject to imprisonment for up to 6 months, a fine of up to $1,000, or both. Exceptions would be made for phone calls made or messages sent during special circumstances, such as an emergency, or in the event of radio communication failure.

The Assembly approved the bill in February by a vote of 76-0. The Senate passed it 38-0 in October. It awaits a final vote by the Assembly, to concur with technical amendments made in the Senate. 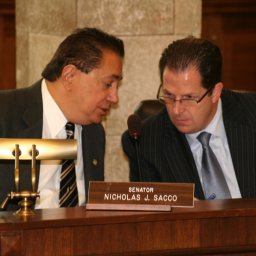 TRENTON – Legislation sponsored by Senators Nicholas Sacco (D-Hudson/Bergen) and Brian Stack (D-Hudson) prohibiting operators of public transit vehicles from texting while at the wheel of a bus or at the controls of a train today received final legislative approval by the full Assembly. The measure now heads to the desk of Governor Chris Christie.

“We know that texting while driving is extremely dangerous, but doing it while operating a public transit vehicle, when the lives of so many people are at stake, is completely unacceptable,” said Senator Sacco. “This legislation will send a strong message to transit employees that this behavior will not be tolerated. Hopefully, the threat of jail time and a hefty fine will make operators think twice about pulling out their cell phones while on duty.”