TRENTON – The Senate on Monday voted to accept recommended revisions by Governor Christie to two measures sponsored by Senator Richard J. Codey (D – Essex, Morris) that would require emergency shelters for the homeless to admit persons with mental illness unless they pose a danger and prohibit emergency shelters for the homeless from refusing to provide services for a minimum time frame unless the shelters are at maximum capacity.

Last year, Senator Codey dressed as a homeless man to exploit shocking problems with the system in the state. Among many of the issues he encountered, the most pressing was the inability of those with mental illness to find a shelter that would take them in; thousands of those with mental illness go to bed every night in New Jersey without a roof over their head. Senator Codey later announced a series of initiatives to help combat homelessness in New Jersey, including these bills.

“Someone with a mental illness has every right to seek shelter and should not be discriminated against,” said Codey. “Those with mental illness already face a mountain of challenges. We do not need to compound those challenges by turning these folks away when they need a place to stay at night. To tell these people there is ‘no room at the Inn’ is cruel and just makes the problem of homelessness that much worse.”

The first bill, S-1888, would require emergency shelters for the homeless to admit any person who has a mental illness and seeks shelter, or food and shelter, unless the person poses a danger to self, others or property.

“Obviously if the person poses a threat, they cannot and should not be admitted and proper measures should be taken. But, when it is clear they do not pose a threat to themselves or anyone else, they have as much a right to access shelter as anyone else. In many cases, the homeless have no where to go other than shelters. So what sense does it make that shelters are turning people away without good reason,” said Codey.

The second bill, S-1889, would prohibit emergency shelters for the homeless from refusing to provide shelter, or food and shelter, for a minimum of 72 hours to an individual or family seeking these services unless the shelter is at its maximum occupancy level. In addition, the bill would provide an exception in the event of emergency conditions, such as snow emergencies or excessive cold or heat. In these events, emergency shelters would be prohibited from refusing to provide services for a minimum of 24 hours from the commencement of the emergency condition or for the duration of the emergency condition, whichever is longer, unless the shelters are at their licensed capacity plus any authorized excess capacity.

The conditional vetoes added language to both bills saying people could be excluded if there is a legal or regulatory basis for refusal and expanded the definition of “emergency conditions” in the second bill to expressly include storms or other related conditions.

Both measures need to be voted on by the Senate.

TRENTON – A measure sponsored by Senators Stephen M. Sweeney and Fred H. Madden that would create a two-year pilot program which would use satellite-based tracking to keep track of convicted sex offenders was unanimously approved today by the Senate Budget and Appropriations Committee.

“As a parent, my first priority is to help ensure the safety of my children,” said Senator Sweeney, D-Gloucester, Cumberland and Salem. ” As a legislator, I have a responsibility to help protect the children of New Jersey, which is exactly what this bill would do. The GPS tracking would let law enforcement officers know sex offenders’ whereabouts at all times, which would help keep them away from children.”

TRENTON – Senators Stephen M. Sweeney and Fred H. Madden today met with Governor Richard J. Codey, Attorney General Peter C. Harvey and other legislators to discuss a bill they are sponsoring that would create a pilot program for the satellite-based tracking of high risk sex offenders.

“According to the U.S. Department of Justice, sex offenders are four times more likely than non-sex offenders to be arrested for another sex crime after being released from prison,” said Senator Sweeney, D-Gloucester, Cumberland and Salem. ” We cannot allow other situations like those of Megan Kanka and Jessica Lunsford to occur – we must do all we can to protect the public from the monsters who prey on innocent, unsuspecting victims.”

WOODBURY – A measure sponsored by Senators Stephen M. Sweeney and Fred H. Madden that would create a two year pilot program for the satellite-based tracking of sex offenders and appropriate $3 million to fund the program was signed into law today by Governor Richard J. Codey at the Gloucester County Criminal Justice Complex in Woodbury.

“In an emergency situation, a GPS tracking device can serve as a preventative tool to alert police, so they can step in and rescue the children before they are assaulted,” said Senator Sweeney, D-Gloucester, Cumberland and Salem. “According to the Rape, Abuse and Incest National Network, 44% percent of rape victims are under the age of 18. The system was failing our children, and that’s why Senator Madden and I had to sponsor this measure – for the kids of New Jersey. Our children are too important not to take every precaution to keep them safe from these dangerous predators.”

TRENTON – Senators Stephen M. Sweeney and Fred H. Madden have introduced a measure that would establish a pilot program for the continuous, satellite-based monitoring of high risk sex offenders.

“According to the U.S. Department of Justice, 40% of sex offenders who re-offend after incarceration do so within one year of their release,” said Senator Sweeney, D-Gloucester, Cumberland and Salem. “This measure is absolutely necessary, and the State must fight to help protect the public from these dangerous predators.”

“We have a responsibility to keep our children safe,” said Senator Sweeney, D-Gloucester, Cumberland and Salem. “National statistics have shown that 40% of sex offenders who re-offend do so within one year of their release. When sexual predators prey on innocent victims, it becomes a matter of public safety. By requiring convicted sex offenders to wear GPS tracking devices, we would be working to help prevent further attacks against members of the community.” 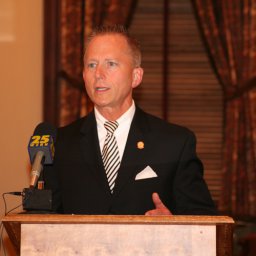