TRENTON – Members of the Senate and Assembly Democrats have sent the attached letter to Acting Commissioner of Education Kimberley Harrington calling on her to “stand up for the students of New Jersey and become a leader of states” by immediately putting in place protections for transgender students.

The letter, signed by several members of the Senate Democrats and Assembly Democrats, comes after the Trump Administration last week rescinded a directive to states that was put in place by the Obama Administration to ensure civil rights protections for transgender students.

The original joint letter from the U.S. Departments of Justice and Education can be found at: https://www2.ed.gov/about/offices/list/ocr/letters/colleague-201605-title-ix-transgender.pdf.

Click here for a copy of the letter sent to Acting Commissioner Harrington on March 1, 2017. 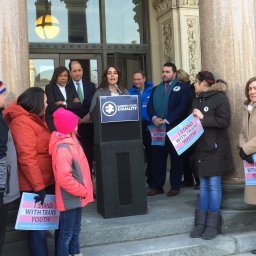