“Right now in New Jersey, more than 4,000 people are waiting for an organ transplant,” said Senator Codey (D-Essex). “ For the first time anywhere in this country, we have the opportunity to mandate a discussion that will save lives and make everyone a hero. Our goal is to generate a conversation about organ donation early and often so that people truly understand what’s at stake and the power they hold to save lives.”

“Organ donors are true heroes, especially to the thousands of New Jersey residents whose lives have been saved due to receiving a much-needed tissue transplant,” said Senator Vitale,(D-Middlesex), Chair of the Senate Health Committee. “However, with the many myths surrounding organ donation, we don’t have enough participation to help the thousands more who languish on recipient lists until it’s too late. We need to do a better job of reaching out to people in New Jersey and encouraging them to register as organ donors, so they can give the gift of life to those in need.”

The NJ Hero Act would create an interactive component to the already existing Donate Life Registry provided by the New Jersey Motor Vehicle Commission (MVC). The legislation would require that within the next five years every resident 18 years of age or older applying for a driver’s license or identification card must first answer a few simple, yet potentially life-saving questions, regarding organ donation.

Applicants would first be asked whether they want to become an organ donor. If they choose “yes,” their donor status would appear on their license and be maintained in MVC’s registry. If they are not ready to make that decision yet, or are not comfortable with sharing that information, they would then be asked if they would like to designate a decision maker on their behalf. The designated decision maker would be a surrogate who would make the decision on behalf of the patient if they are unable. Sen. Codey deemed this component crucial to increasing the number of organ donors in New Jersey.

“We’ve found that many times people chose not to be a registered organ donor because they are afraid that if they go to the hospital in a life-threatening situation, a medical practitioner will not use every means to save them if they know that the person is willing to donate their organs,” added Sen. Codey. “Now we are removing that concern from the equation. You can keep that decision confidential and place it in the hands of a family member or friend, someone you can discuss your organ donor wishes with privately and trust to make the right decision on your behalf.”

If a person does not wish to become a donor or designate a decision maker on their behalf, they must simply check off a box acknowledging the importance of making an organ donation decision. Once they have completed this process, they will be given a PIN number that they must present to an MVC clerk before they can apply for or renew a license or ID card. The legislation calls on the MVC to create an Internet-based system where residents can complete this process before going to an MVC location.

The bill also incorporates a comprehensive education component at the high school and collegiate levels. Under the NJ Hero Act, New Jersey would be the first state to incorporate mandatory organ donation education into the high school core curriculum. Beginning with the 2008-2009 school year, school districts would be required to implement the component into the Health and Physical Education curriculum. At the collegiate level, institutions of higher education would be required to provide information on New Jersey’s organ donor policies either as part of the curriculum or through student health services.

“The death of a loved one can be a devastating blow, but for families of organ donors, they can take at least a measure of comfort in knowing that, even though that loved one may be passed on, as their final act, they gave a gift of continued life to someone in need,” added Sen. Vitale. “By increasing awareness of the importance of organ donation in schools, and requiring people to make a decision about donating as part of the driver’s license application, we’re taking a big step to increase our donor pool, and ensure that we have the greatest participation possible – to save the most lives possible.”

The NJ Hero Act, bill S755, was introduced by Sen. Codey in December as part of a package of bills along with S753 and S754, the Revised Uniform Anatomical Gift Act, which are aimed at increasing organ donation and providing oversight. All three bills were released from committee today and now head to the full Senate for a vote. 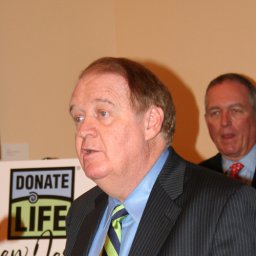