TRENTON – Senators Bob Smith, Joseph F. Vitale, and Patrick J. Diegnan, Jr. today applauded the signing of the transportation funding bill (S-3076) that will up TTF investments in the current fiscal year by $400 million, comprised of $140 million for NJ Transit for technology improvements and system safety and $260 million for work on roads and bridges throughout the state. The project list includes funding to advance the development of a new rail station in North Brunswick on the Northeast Corridor line.

“The North Brunswick Main Street transit village has lacked the central part of its conception – the train station. Improving how we move people and goods across the state can only lead to more sustainable communities and serve as a catalyst for a successful economy in New Jersey,” said Senator Smith (D-Middlesex, Somerset). “This is great news for Middlesex County. Not only will the area benefit from the creation of jobs by the project, but residents will also benefit from alleviated traffic congestion and alternative commuting options to and from Newark and New York.”

“Our region benefits from several major train stations that offer residents and those passing through vital commuting options, but expanding that network will provide even greater benefits to our regional economy,” said Senator Vitale (D-Middlesex). “This legislation was a priority for the state, and the new train station in North Brunswick will prove beneficial for the local economy.”

“Adding a station in North Brunswick will help relieve some traffic on the Route 1 corridor and provide alternate transportation methods for the residents and businesses in the area,” said Senator Diegnan (D-Middlesex). “This is a win-win for the local community of North Brunswick and for the greater Middlesex County.”

The $400 million of funding under the legislation signed this week will be distributed within 100 days for the projects identified by the Department of Transportation through the TTF selection process. The added funding for the 2017 Fiscal Year will boost total spending to $2 billion, the same level that will be sustained over the next eight years under the plan that renewed the TTF. 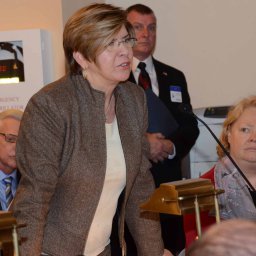 POU TO RECEIVE LEGISLATOR OF THE YEAR AWARD