TRENTON – A bill sponsored by Senator Bob Smith which would consolidate and refocus efforts to review the State’s criminal sentencing provisions to ensure greater fairness and efficient use of New Jersey’s resources was unanimously approved by the Senate Judiciary Committee today.

“In an effort to appear tough on crime, New Jersey’s lawmakers have, over the years, relied on mandatory minimum sentences to get the point across,” said Senator Smith, D-Middlesex and Somerset, and a member of the Judiciary Committee. “However, by removing judicial discretion from the criminal justice system, we’ve unwittingly created a monster of one-size-fits-all penalties for even non-violent crimes. We need to take a look at the criminal justice system in New Jersey, and adopt a fairer set of guidelines which makes the most of State resources.”

The bill, S-1880, would create the Criminal Sentencing Commission to study and review the State’s sentencing laws. The 11-member Commission would be comprised of bipartisan members appointed by the Governor, the Senate President, the Assembly Speaker, and the Minority Leaders of each Legislative house, as well as the Attorney General, the Public Defender, the Chief Justice and the President of the New Jersey County Prosecutors Association, or designees chosen by those officials. The Commission would have two years to study and review the statutory law concerning crimes and criminal sentencing, before issuing its final report, with recommendations to lawmakers for revisions in the laws governing the criminal justice system.

According to Senator Smith, the new Commission will be charged with developing recommendations with the ultimate goal of rational, just and proportionate criminal sentencing. The Commission will be asked to take into account the needs of public safety, offender accountability, crime reduction and prevention and offender rehabilitation, while promoting the efficient use of the State’s Corrections resources.

“Not only do we have to be aware of the effects that sentencing guidelines have on criminals, but also the effects on the State’s coffers,” said Senator Smith. “It’s expensive to require mandatory imprisonment for every minor offense that comes across a judge’s desk. Obviously, the number one priority in criminal justice needs to be justice, but we need to also make the most out of limited State resources.”

Senator Smith noted that recent attempts to review criminal sentencing in New Jersey have met with little success. The Criminal Disposition Commission (CDC) was created in 1978 as a permanent commission of the Legislature, but according to Senator Smith, has met infrequently and has not produced any recommendations for reform within the last several years. In 2004, the Governor signed legislation creating the Commission to Review Criminal Sentencing (CRCS), but the mission of that panel was hampered by, among other issues, the Commission’s lack of partisan balance and a broad mandate to look at nearly every aspect of the criminal justice system. Senator Smith noted that both panels would be eliminated under his legislation in favor of a streamlined, focused Commission charged with making real recommendations for sentencing reform.

“Both existing sentencing commissions came to the table with good intentions, but were short on results,” said Senator Smith. “The CDC just hasn’t been productive in recent years, and the CRCS has given us disjointed recommendations which reflect on the broad mandate to look at everything. We need a focused, experienced review of the State’s criminal justice system, and the new Criminal Sentencing Commission would provide just that.”

TRENTON – A bill sponsored by Senator Bob Smith which would consolidate and refocus efforts to review the State’s criminal sentencing provisions to ensure greater fairness and efficient use of New Jersey’s resources was approved by the Assembly today by a vote of 60-14, with 3 abstentions.

“For too long, New Jersey lawmakers have advanced legislation with mandatory minimum sentencing requirements, to send the message to voters that they’re tough on crime,” said Senator Smith, D-Middlesex and Somerset, and a member of the Judiciary Committee. “This policy crosses the partisan divide, and unfortunately, a side-effect from our tampering with criminal sentencing is a judiciary in the Garden State with very little judicial discretion. Under the checks and balances of government in this country, the courts are the final arbiter of justice, but when their hands are tied by mandatory sentencing guidelines, legislators are overstepping their bounds.”

TRENTON – A bill sponsored by Senator Bob Smith which would consolidate and refocus efforts to review the State’s criminal sentencing provisions to ensure greater fairness and efficient use of New Jersey’s resources was approved by the Senate today by a vote of 34-2, receiving final legislative approval.

“It’s become a common Trenton tradition for legislators to advance bills calling for mandatory minimum criminal sentences, to appear tough on crime to their constituents,” said Senator Smith, D-Middlesex and Somerset, and a member of the Judiciary Committee. “A side-effect of this tradition though is a State judiciary system devoid of judicial discretion, with judges having to rely on a formula rather their own legal considerations for sentencing. This informal policy of policymakers legislating criminal sentences has created a needlessly complex and arbitrary criminal code, and is contrary to the principle of separation of powers which is at the core of our government.”

TRENTON – A bill sponsored by Senator Bob Smith which would consolidate and refocus efforts to review the State’s criminal sentencing provisions to ensure greater fairness and efficient use of New Jersey’s resources was approved by the Senate today by a vote of 38-0.

“New Jersey’s lawmakers have recently relied on mandatory minimum sentencing guidelines to tell their constituents that they’re tough on crime,” said Senator Smith, D-Middlesex and Somerset, and a member of the Judiciary Committee. “However, the side effect of the convoluted sentencing guidelines on the books is a State judiciary without judicial discretion, unable to make penalty decisions from the bench. We need to take a serious look at the maze of sentencing guidelines in New Jersey, and where appropriate, give greater discretion to the talented judges appointed in the Garden State.” 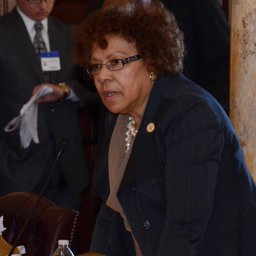