“Three years ago, I introduced legislation to abolish the death penalty to ensure that the system of justice administered by our State is effective, consistent, and just.

“Today, the Senate Judiciary Committee has an opportunity make that a reality.

“129 days ago, the New Jersey Death Penalty Study Commission submitted its Report to the Governor and to us.

“That Report confirmed that the death penalty actually costs more than life in prison without parole — that there is a very real risk of executing an innocent person — that it stands in direct contrast to our evolving standards of decency — and that it cannot be proven to deter crime.

“It also confirmed that the death penalty is a cruel hoax on the family members of murder victims.

“In short, this report reaffirmed what many New Jerseyans already believe: the death penalty in this State has failed to ensure that our system of justice is effective, consistent and just.

“In the Commission’s opinion, the death penalty is fatally flawed – and should be replaced with a stronger and more certain punishment of life in prison without any possibility of parole.

“I want to thank Chairman Adler for his leadership in bringing us here today to give New Jersey an opportunity to lead the nation by recognizing that the death penalty has no reason to exist in a civilized society.

“I also want to acknowledge the leadership of my good friend Bob Martin. He has been steadfast and courageous in doing what is right on this and many other issues.

“We should also thank Senator Shirley Turner, whose bill last year placed a moratorium on executions and created the Study Commission.

“Make no mistake. The bill we consider today will be one of the toughest sentencing laws in the Country.

“In addition to abolishing the death penalty, it broadly expands the list of crimes for which a Life Without Parole Sentence would be a MANDATORY sentence.

“It also requires that inmates sentenced under this statute will have to spend their entire lives in a maximum security prison.

“The bill to create the Death Penalty Study Commission was supported by 75% of the State Senate and nearly 70% of the Assembly –many Republicans and many Democrats.

“Members of the Commission included:

* A distinguished retired Supreme Court Justice who had voted to uphold capital punishment;

* A Republican Police chief who supported the death penalty;

* Two sitting County Prosecutors who had sought the death penalty;

* The father of a murdered daughter, religious leaders, victims’ advocates and other murder victims’ family members.

“This was an unbiased, exhaustive and bipartisan study that was supported by 11 to 1 vote, with one abstention.

“In addition to the study commission, the County Prosecutors Association supports this bill. Additionally, it is important to note that not a single law enforcement officer testified before the commission in favor of the death penalty.

“To reiterate, there is no credible evidence that the death penalty deters anything.

“There is, however, plenty of evidence that mistakes are made in capital cases, not only throughout our country, but also right here in New Jersey.

“’I want you to remember that I spent seventeen miserable years behind bars after being convicted of a murder someone else committed…DNA evidence allowed me to finally walk out of prison a free man. As long as the death penalty exists in New Jersey, the next innocent person may not.’

“The most difficult aspect of abolishing the death penalty is assessing its impact on families of murder victims, for there is no right way or wrong way to feel when a family member is murdered.

“You all have before you a letter signed by more than 50 family members whose views differ greatly on the death penalty, but who stand unified in telling us to end it.

“Here is what they say:

“’To be meaningful, justice should be swift and sure. Life without parole, which begins immediately, is both of these; the death penalty is neither.’

“There is no closure for them…no moving on….just more attention to the murder and less on the needs of victims’ families.

“To make matters worse, there is currently a serious lack of funding for the family members of murder victims.

“All of that changes with what we are doing today.

“The death penalty cannot be fixed. The time has come to abolish it. All the safeguards in the world cannot insure that an innocent person will not be executed. All those safeguards will just add to the cost and unending appeals.

“Our State has not imposed the ultimate punishment since 1963. And we should never impose it again.

“Some of my colleagues argue that we should maintain the death penalty for cases of terrorism. I disagree. Terrorists want to be martyrs. Let’s not give them another reason to commit heinous acts by singling them out for the death penalty. Additionally, there have been numerous arrests for terrorism that have proved to be mistaken. The same chance exists, with the same lengthy appeals process, to execute an innocent person. As a society, we’re better than that.

Lesniak Statement On The Signing Of The Death Penalty Ban

TRENTON – Senator Ray Lesniak, sponsor of S-171/2471, the bill that would eliminate the death penalty in New Jersey and replace it with life in prison without parole, made the following statement today as Governor Jon Corzine signed the bill into law:

“In 1982, I voted to reinstate the death penalty in New Jersey. Today, I’d like to thank some folks who helped correct that mistake.

“First, I want to thank Senator Martin and his Republican colleagues, Senators Allen, Palaia and McCullough, for their support, along with Assemblymen Bateman, Blee and Rumpf. It’s not often we vote our conscience in the Legislature. We should do it more often.

TRENTON – Senator Shirley K. Turner today welcomed Senate Judiciary Committee approval of her bill to end the use of the death penalty in New Jersey and replace it with a sentence of life in prison without parole, saying that, “The Legislature can not move quickly enough to get the death penalty ban on the Governor’s desk.”

“The death penalty is not only barbaric, but it’s wasteful and ineffective. I am proud that New Jersey is quickly moving forward to end the chance of this senseless punishment being used in our state,” said Senator Turner, D-Mercer.

TRENTON – Senator Shirley K. Turner, D-Mercer and prime sponsor of Senate Bill 171, which eliminates the death penalty in New Jersey and replaces it with life without the possibility of parole, made the following statement today following the signing of the bill into law:

“The death penalty made our state weaker, not stronger, and certainly not safer. Capital punishment is rooted in a desire for revenge, rather than a sense of justice.

“When I sponsored the measure that created the Death Penalty Study Commission, I knew that the findings of that commission would one day lead to today’s action by the Governor.

TRENTON – Senate President Richard J. Codey (D-Essex) announced today that the State Senate has scheduled a floor vote for Monday, December 10, to consider a bill that would eliminate the death penalty in New Jersey and replace it with life in prison without parole.

“This legislation (S171/2471) will ensure that the system of justice administered by our State is effective, consistent and just,” said Senator Lesniak, D-Union, a former proponent of capital punishment.

09 May 2007
Lesniak Statement To Senate On Death Penalty Ban

TRENTON – Senator Ray Lesniak, sponsor of S-171/2471, the bill that would eliminate the death penalty in New Jersey and replace it with life in prison without parole, made the follow statement today on the floor of the Senate:

“We shouldn’t have the death penalty unless we’re going to use it. And we shouldn’t use it if there is a chance of executing an innocent person.

TRENTON – Senator Shirley K. Turner, prime sponsor of S-171, the legislation that would replace the death penalty in New Jersey with life in prison without parole, made the follow statement today after the Senate approved the bill:

“New Jersey has long struggled with the question of whether we wanted, needed or could afford to have the death penalty in our state.

“In the past, both sides of the debate have relied on arguments based on emotion to make their case, trying to back up their points with anecdotal evidence as to the effectiveness, or lack thereof, of the death penalty. More often than not, the two sides would just shout past each other. 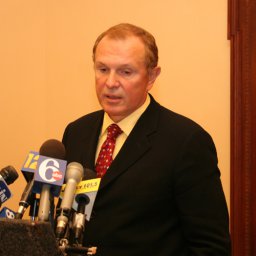 TRENTON – Senator Ray Lesniak, sponsor of S-171/2471, the bill that would eliminate the death penalty in New Jersey and replace it with life in prison without parole, made the follow statement today before the Senate Budget and Appropriations Committee:

“A few months ago I hosted a reception at my home in Elizabeth to welcome back Brian Halsey to the community. Brian spent 19 years in prison for murdering an 8 year old boy and a 7 year old girl. The boy was sexually assaulted, large nails were hammered into his brain and his face was slashed with scissors. The girl was brutally raped, beaten, and strangled to death. He confessed to the crime and failed a polygraph test.

TRENTON – Senator Shirley K. Turner, prime sponsor of S-171, the legislation that would replace the death penalty in New Jersey with life in prison without parole, made the follow statement today after the Senate Budget and Appropriations Committee approved the bill:

“As the sponsor of the legislation which created the Death Penalty Study Commission, I wholeheartedly support this bill which contains the recommendations made by that commission.