TRENTON – A bill sponsored by Senate Majority Leader Steve Sweeney to give the State Division of Investment more options in terms of how they invest State cash management and pensions funds was signed into law last week by Governor Corzine.

“The current national economic crisis has demanded that we be more flexible with how New Jersey invests its money,” said Senator Sweeney, D-Gloucester, Cumberland and Salem. “With enhanced authority, the State Investment Council can invest funds in New Jersey bank and credit union accounts, which will help encourage lending to State businesses, small and large. This law will allow the Investment Council to immediately begin to reshape our State’s investment portfolio to increase the return while helping to rebuild New Jersey’s economy.”

The bill, S-2552, permits the State Division of Investment to use the State Cash Management Fund and pension funds in several ways not previously permitted by regulation. Specifically, the new law authorizes the Division to create separate sub-funds within the State Cash Management Fund and pension funds to invest in tax-exempt bonds or notes issued by the State and its authorities, as well as any local government unit in New Jersey. Under the law, the Division is now also authorized to invest in New Jersey community banks in order to make more capital loans available to New Jersey small businesses, local governments and individual borrowers, and is permitted to invest in safe asset types which have a longer period of maturity and a higher yield in terms of interest.

Senator Sweeney noted that the investments authorized under the law were previously available under State statute and federal regulation, but the Investment Council was prohibited from entering into these investments due to regulatory restrictions placed on the State Cash Management and pension funds. Since the time that the current State investment regulations were adopted, the Federal Deposit Insurance Corporation (FDIC) has established a new system (called the CDARS program) that spreads the risk of investment in longer-term, higher-yielding CDs across multiple banks. Senator Sweeney’s law reflects the new federal program, and allows the State to take better advantage of safe asset types with more attractive investment returns.

Senator Sweeney added that the enhanced authority for investment under his law is set to sunset after one year, which would give the Investment Council more time to revisit the more restrictive regulations, and direct State investment policy accordingly, taking into consideration the evolving State economic picture and other factors.

“Ultimately, we don’t want to do anything that jeopardizes taxpayer funds or increases the State’s chronic budgetary problems,” said Senator Sweeney. “There’s no reason why we can’t spur economic growth and improve the long-term outlook on underperforming investment funds at the same time. This law gives the State Investment Council the authority and the mandate to be more prudent with investment opportunities in order to stimulate our State economy.”

The bill received final legislative approval in the Assembly in June. 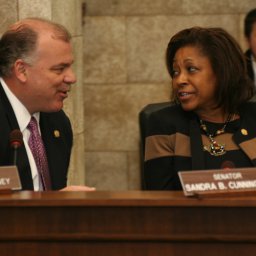 TRENTON – A bill sponsored by Senate Majority Leader Stephen Sweeney (D-Gloucester, Cumberland and Salem) to spur small business lending by New Jersey’s community banks by allowing the state to invest a portion of its cash management funds in certificates of deposit, fixed income securities and other investments was approved today by a Senate committee.

The bill (S-2552) is intended to increase the liquidity of New Jersey community banks so they can make more and cheaper capital available to small businesses, local governments and individual borrowers.

TRENTON – A bill that would allow the state to invest a portion of its cash management funds in certificates of deposit, fixed income securities and other investments, sponsored by Senate Majority Leader Stephen Sweeney (D-Gloucester, Cumberland and Salem) was approved 37-0 today by the full Senate.

The bill (S-2552) would spur small business lending by New Jersey’s community banks by increasing their liquidity so they can make more and cheaper capital available to small businesses, local governments and individual borrowers.