“If you’ve ripped off the taxpayer once, you lost the public’s trust and shouldn’t be given a chance to do it again,” said Turner. “We’ve seen far too many people practice the art of deception when it comes to business dealings, and the public’s hard-earned dollars need to be protected.”

Under current law, contractors convicted of fraudulent activity in connection with government work can be barred from state contracts for up to five years, along with other penalties. The bill, S-1601, would stiffen the penalty by permanently barring the company from doing business with state and local governments.

Last year, for example, a major engineering firm pleaded guilty to money laundering and making false representations for government contracts. Under the plea agreement, the company accepted a 10-year ban on public contracts.

The prohibition would also apply to key employees, and the Treasury Department would maintain a publicly-available list of barred contractors and individuals. Also, companies and individuals bidding for government contracts would have to certify that they have not been convicted of fraud.

“The bill protects the taxpayers while not making it onerous on local governments during the procurement process to determine who has a clean track record,” Turner said.

The bill was approved unanimously in a 5-0 vote by the committee. 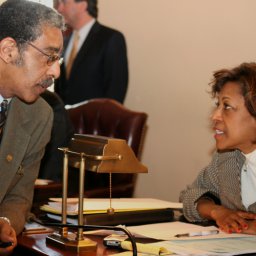 “With billions of taxpayer dollars going to school construction programs throughout New Jersey, it is important that women and minority-owned businesses get a fair share of the contracts awarded in this State,” said Senator Rice, D-Essex. “Each year we work hard to help businesses run by minorities and women to bid and win contracts on various State projects. Unfortunately, we need more oversight to ensure that an equitable amount of projects are given to these groups. By requiring the SDA to provide this information we will gain a better understanding of how they award contracts and if more needs to be done to help minorities and women bid on projects.”