Senate bill S-1279, would upgrade the penalty for unlawfully selling, giving or transferring a firearm to a person under 18 years of age. The legislation would increase the penalty to a second degree crime, which is punishable with five to ten years in prison and up to a $150,000 fine.

“Most homicides in urban areas are gang, gun, and drug-related,” said Senator Turner. “The bill will help to reduce the risk created when guns are illegally transferred to minors to carry out retaliatory shootings or to commit other crimes. Any person that transfers a firearm to a minor is culpable for putting the public’s safety at risk and will face stiffer penalties.”

The second bill, S-1133, will keep violent and repeat offenders off the streets by requiring those charged with the most egregious gun-related crimes to pay full cash bail. This bail restriction would also apply to leaders of gun trafficking networks and repeat offenders prone to violent crimes.

“Too often, news reports on violent crimes describe an offender out on bail for a similar offense,” said Senator Turner. “These are the types of urban terrorists who should stay behind bars while they await trial, not be released on reduced bail to continue their reign of terror. Our police force is understaffed and overworked arresting and re-arresting the same criminals. The revolving door of justice is demoralizing to police officers and the public.”

The third bill, S-2804 would ensure that those convicted of unlawful possession of a gun will serve mandatory prison terms to keep them off the streets. The bill would increase the mandatory minimum from one-third of the sentence to one-half of the sentence or three and a half years – which ever is greater. The bill was originally drafted after the 2009 shooting at a neighborhood party in Trenton that killed 13-year-old Tamrah Leonard.

“If you ignore gun laws, then you do it at your own peril,” said Senator Turner. “You’re going to go to jail and stay there longer.”

Senator Turner also noted that better education and job training will create greater job opportunities which are essential to reducing the culture of crime and violence in our communities.

“Our young people need positive options to avoid gangs and a life of crime,” said Senator Turner. “We need to break the culture of poverty that breeds gang membership. We need to strengthen families and improve parenting, as well as eliminate the economic and social barriers to education and job opportunities; however, we can’t create opportunity and economic development if we don’t restore law and order in our cities. We need to provide residents and businesses with the peace of mind now that they are safe from the criminals who pose the greatest threat to our communities.” 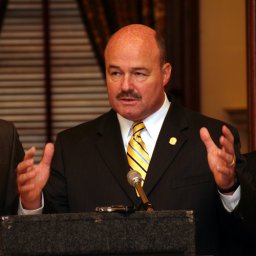