TRENTON – Senator Joseph F. Vitale today applauded officials at Greystone Park and Ancora psychiatric hospitals for being the first in the State to implement smoke-free policies under a law sponsored by the Senator and signed by the Governor last year.

“By their nature, psychiatric hospitals exist to promote health and wellness of the mind, body and soul,” said Senator Vitale, D-Middlesex, and Chairman of the Senate Health, Human Services and Senior Citizens Committee. “Looking the other way while patients and employees light up seems contrary to the very mission of these facilities. I’m glad Greystone and Ancora are becoming the first smoke-free psychiatric hospitals in New Jersey, and I hope other facilities follow their lead.”

Under the new smoke-free policies, smoking would be prohibited at Greystone Park and Ancora. The new smoking ban would bar residents, patients, staff and visitors from smoking anywhere on the hospitals’ grounds. Both facilities have also established smoking cessation programs for employees and patients alike, and will continue to offer support to help people quit while enforcing the smoking ban at the facility.

“Studies have shown that patients and residents in psychiatric hospitals are more prone than other populations to nicotine addiction,” said Senator Vitale. “Not only that, but in some cases, the chemicals in cigarette smoke can lessen the effectiveness of certain psychotropic and anti-psychotic drugs. It’s well-past time that psychiatric hospitals recognize the health dangers of smoking and join every other public building in New Jersey in imposing and enforcing a strict, no-exceptions smoking ban on their grounds.”

The lawmaker said that he expects other facilities in New Jersey to follow the example of Greystone Park and Ancora. Under his bill, S-625, which was signed into law on April 7, 2008, facilities that fall under the jurisdiction of the Division of Mental Health Services under the Department of Human Services are permitted to prohibit smoking on their grounds if they’ve developed and maintained a smoking cessation program for one year prior to the ban going into place. Senator Vitale noted that at the time the bill was signed, Human Services Commissioner Jennifer Velez and her staff supported efforts to make psychiatric facilities in New Jersey smoke-free.

“I applaud Commissioner Velez and her staff for their commitment to making smoke-free psychiatric facilities a reality in New Jersey,” said Senator Vitale. “Smoking contributes to higher health care costs for facilities, reduced quality of life for patients and an early grave. Thankfully, Greystone and Ancora – and hopefully other facilities in the near future – are doing their part to help employees and patients kick the habit, and no longer giving tacit approval to this life-threatening practice.”

TRENTON – A measure sponsored by Senator Joseph F. Vitale, which would allow State psychiatric hospitals to ban on-campus smoking, as long as a smoking cessation program is offered for clients, patient and employees was approved today by the full Senate by a vote of 25-11.

“This bill would do for residents at psychiatric hospitals what they and others around the world might not be able to do for themselves – stop smoking,” said Senator Vitale, D-Middlesex, who chairs the Senate Health, Human Services and Senior Citizens Committee. “Statistics have shown that the impact of cigarettes and nicotine at psychiatric facilities is higher for a number of reasons, including deeper inhalation, and the increased negative effect that nicotine can have when combined with psychotropic drugs.”

TRENTON – Senator Joseph Vitale, the sponsor of legislation allowing State psychiatric hospitals to ban smoking, today applauded the membership of the NJ Tobacco-Free Hospital Campus Collaborative for its collective commitment to banning smoking anywhere on the campuses of their health facilities. The group held a news conference this morning in the State House Annex, to update the public on its progress.

“Nicotine is one of the most addictive and most harmful toxins,” said Senator Vitale, D-Middlesex, who chairs the Senate Health, Human Services and Senior Citizens Committee. “By their very nature, medical facilities are designed to protect the health of patients and the surrounding communities, and it is an unhealthy conflict to allow patients, visitors and employees to engage in such an unhealthy activity on hospital grounds. Our medical facilities and personnel must set a positive example.” 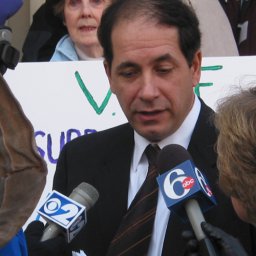 TRENTON – A measure sponsored by Senator Joseph F. Vitale which would allow State psychiatric hospitals to ban on-campus smoking, as long as a smoking cessation program is offered for clients, patients and employees, was unanimously approved today by the Senate Health, Human Services and Senior Citizens Committee.

“Statistics have shown that the impact of cigarettes and nicotine at psychiatric facilities is higher for a number of reasons, including deeper inhalation, and the negative effect nicotine can have on psychotropic drugs,” said Senator Vitale, D-Middlesex, who chairs the panel. “This legislation would send a clear message that we are dedicated to protecting the health of clients, patients and employees at these facilities.”