TRENTON – A bill sponsored by Senator Joseph F. Vitale which would authorize the State to sell 15.5 acres of land and improvements which are currently part of East Jersey State Prison to the Township of Woodbridge to be remediated as low-income, special needs housing was approved by the Senate Budget and Appropriations Committee today by a vote of 9-4.

“During difficult economic times, it’s hard to get investors to put capital into building any housing stock, let alone housing stock for low-income, special needs residents,” said Senator Vitale, D-Middlesex. “However, there’s a greater need than ever before for affordable housing and community-based housing for people with disabilities. By remediating existing surplus State property, we can put the East Jersey State Prison property to good use, and increase our affordable housing stock in Woodbridge at a fraction of the cost of constructing new homes.”

The bill, S-1929, would authorize the State Treasurer to sell and convey to Woodbridge Township 15.5 acres of property that’s been identified as surplus and is currently part of East Jersey Prison. The property in question includes four former employee residences, including a house which had previously been used by the facility’s warden. Under the bill, Woodbridge would acquire the property for a nominal fee, and would develop and remediate the property to create new special needs housing which fulfills a portion of the municipality’s fair share obligation under the State’s affordable housing laws.

“Not only is this a cost-effective solution to provide community housing for people with developmental disabilities, but it creates a unique opportunity to create a seamless transition for them,” said Senator Vitale. “Transitioning from the structured environment of a developmental center to a supervised community setting can be a difficult process for some, but having developmental center staff a block away could help ease that transition. At the end of the day, we want to make sure that we provide enough support and assistance to residents with developmental disabilities to allow them to live and ultimately thrive in a community-based setting..”

TRENTON – Legislation sponsored by Senators Joseph F. Vitale and Nicholas J. Sacco to get unsafe vans off the road through a commuter van study was approved by the full Senate today by a vote of 26 to 12.

“This legislation is part of a package of bills designed to reduce the number of individuals who use illegal van services to travel to and from work and to crack down on those who improperly run commuter services,” said Senator Vitale, D-Middlesex. “The safety risks of illegal van services are glaring, and they are putting not just the passengers but also other residents on the road in danger. This study will help identify insurance incentives that will get these unsafe and illegal vans to change how they are doing business in New Jersey.” 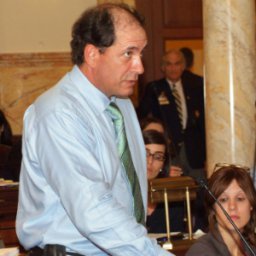 TRENTON – A bill sponsored by Senator Joseph F. Vitale which would authorize the State to sell 15.5 acres of land and improvements which are currently part of East Jersey State Prison to the Township of Woodbridge to be remediated as low-income, special needs housing was approved by the Senate yesterday by a vote of 23-12, receiving final legislative approval.

“In New Jersey, real estate is at a premium, and new development projects for people with special needs usually reflect the high cost of real estate in the Garden State,” said Senator Vitale, D-Middlesex. “This bill transfers surplus property at East Jersey prison to put it to good use in the community, creating community-based housing in close proximity to the Woodbridge Developmental Center for people with developmental disabilities. This will ensure a seamless transition for people who would thrive in a community setting at minimal cost to Woodbridge or the State of New Jersey.”