Bill Would Protect Those Who Seek Help for Overdose Victims

TRENTON – Legislation sponsored by Senator Joseph F. Vitale and Senate Majority Leader Loretta Weinberg that would protect good Samaritans who call 911 for someone experiencing a drug overdose was approved today by the Senate Judiciary Committee.

“Drug overdoses are now the leading cause of accidental death in New Jersey and many of them could be prevented if those near the victim were not afraid to call 911 for emergency attention or were not compelled to hide important facts such as what drugs the victim had taken,” said Senator Vitale (D-Middlesex). “Hopefully this bill will remove people’s fears and end their hesitation in reaching out for emergency help to save someone’s life.”

“The Good Samaritan Emergency Response Act” (S-851) would provide limited immunity for certain individuals who seek medical assistance for someone experiencing a drug overdose. Neither the overdose victim nor the individual who seeks medical assistance for the victim could be arrested, charged, prosecuted or convicted for obtaining, possessing, using or being under the influence of a dangerous controlled substance or possessing drug paraphernalia or needles. Additionally, they would receive immunity for any penalty for a parole, probation or restraining order violation.

The bill would treat the fact that the person sought medical assistance for someone experiencing a drug overdose as a mitigating factor in a prosecution for other drug-related offenses. It would also provide the good Samaritan with an affirmative defense against prosecution if the overdose leads to the death of the victim. Under current law, a person who manufactures, distributes or dispenses Schedule I and II controlled-substances such as heroin, methamphetamine or cocaine is liable for the death that results from the injection, inhalation or ingestion of that substance and is guilty of a first-degree crime.

“Saving someone’s life is more important than prosecuting either the victim or the person who does the right thing by calling for help,” said Senate Majority Leader Weinberg (D-Bergen). “Our current law encourages people to abandon those who are overdosing out of fear of arrest and prosecution. With the ‘Good Samaritan Emergency Response Act,’ we can ensure that the laws reflect our values that these people’s lives are important and worthy of saving.”

The bill is similar to the “9-1-1: Lifeline Legislation,” enacted in 2009, which provides immunity to underage drinkers if they call for medical assistance for another underage person whose life is endangered due to alcohol consumption.

The bill was approved by the Senate Judiciary Committee with a vote of 9-3-1. It now heads to the full Senate for consideration. 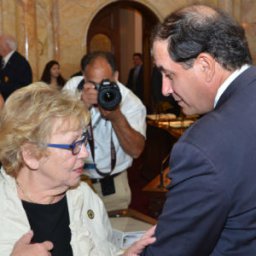 TRENTON – Legislation sponsored by Senator Joseph F. Vitale and Senate Majority Leader Loretta Weinberg that would protect good Samaritans who call 911 to seek medical assistance for someone experiencing a drug overdose was approved today by the full Senate and now heads to the Governor’s desk.

“The leading cause of accidental death in New Jersey is no longer automobile accidents, but drug overdoses,” said Senator Vitale (D-Middlesex). “Many of the hundreds of New Jersey men and women who die each year from drug overdoses could have been saved if those with them when they overdosed were not afraid of arrest or prosecution for seeking emergency medical attention. By creating a limited immunity from prosecution for individuals who call for medical assistance for an overdose victim, we can hopefully keep that person alive long enough to get them into a substance abuse treatment program, so they can get back their lives.”