TRENTON – Senator Loretta Weinberg (D-Bergen) today called for changes in the laws governing the use of taxpayer dollars to lobby state government, citing the release of a report by the Office of the State Comptroller that found towns, counties, authorities and other public agencies spend millions of dollars to lobby the state.

“According to the Comptroller’s report, most of the spending goes toward lobbying the Assembly and Senate on pending legislation,” Sen. Weinberg said. “This begs the question: Why are they spending the public’s money to lobby lawmakers when they should have access to them free of charge?”

The report, “The Use of Public Funds to Lobby New Jersey State Government,” by State Comptroller Matthew Boxer, found public entities paid at least $3.87 million – including almost $1 million by public entities right here in Bergen County – to outside lobbying firms to lobby state government during the 2006-2007 Legislative session. Nearly half of the money was spent by public authorities and commissions.

“According to the Comptroller, the next most common issue is monitoring pending bills in the Legislature,” Sen. Weinberg said. “Our Legislative website allows members of the public to monitor pending legislation for free. Like everyone else, these government entities have access to the Legislature, Office of Legislative Services, Minority and Majority Offices – all of which are free.”

Weinberg is the sponsor of a bill (S-115) that would amend current state law to require that lobbyists disclose how much money they receive from a state or local government entity when they’re hired for the purpose of influencing governmental processes. The bill would also require that amount to be reported on the notice of representation form lobbyists are currently required to file with the Election Law Enforcement Commission (ELEC).

Boxer’s report found public entities that lobby state government are not held to the same transparency standards as private companies. The Comptroller’s report includes a number of recommendations to promote greater transparency, including requiring public entities to disclose their justification for retaining a lobbying firm as well as what was accomplished as a result of the lobbying effort. It also recommends public entities evaluate whether they can save money by using other available resources or by limiting contracts with lobbying firms to specific tasks rather than paying for ongoing general lobbying services.

“I’m immediately requesting that the state Office of Legislative Services begin drafting a bill that embodies the common sense recommendations made by Comptroller Boxer in his report,” Sen. Weinberg said. “At a minimum, government entities should be held to the same reporting standards as private entities. If anything, their use of taxpayer dollars for these purposes would seem to argue for an even greater level of transparency. But more importantly, in these really tough economic times when municipalities, counties and the state are considering lay-offs, furloughs and the curtailment of important programs, the continued expenditure of these dollars is infuriating, unnecessary and we should make sure it ends immediately.” 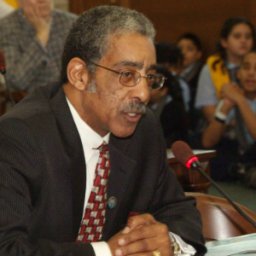 Rice Bill To Crack Down On Blighted, Foreclosed Properties Approved In Committee

TRENTON – A bill sponsored by Senator Ronald L. Rice, which would create a mechanism for municipalities to fine creditors when foreclosed properties fall into disrepair was approved by the Senate Commerce Committee today by a vote of 5-0 with one abstention.

“New Jersey, like the rest of the country, is in the middle of a foreclosure crisis, and when these foreclosed properties fall into disrepair, they can have a negative impact on the property values and safety of the surrounding neighborhood,” said Senator Rice, D-Essex. “When a creditor forecloses on a property, they still have a responsibility to the municipality to ensure that the property doesn’t become a burden on the rest of the community. This bill would give local officials the authority to issue citations and impose fines to make sure that creditors live up to their responsibilities.”