Weinberg: Now Is The Time To Reform Port Authority

TRENTON – Senator Loretta Weinberg today called for comprehensive reforms at the Port Authority of New York and New Jersey to make the bi-state transit agency “more accountable and responsive to the public it was created to serve.”

Senator Weinberg said her bill, just introduced, S-2475, is part of a two-state legislative reform effort with New York Assemblyman Richard L. Brodsky, to “end a culture of secrecy” at the Port Authority.

“For too long, the Port Authority has functioned as a bi-state secret bureaucracy of insiders where billions of dollars worth of mass transportation projects get awarded with virtually no public input,” said Senator Weinberg, D-Bergen. “We need a transparent Port Authority that’s in shape to fight terrorist threats, maintain our bridges and tunnels and improve our airports.”

Senator Weinberg’s bill would restrict lobbyists from improper influence on contract proposals, create audit, governance and finance committees among the Port Authority’s board of commissioners and force public disclosure about plans to develop or sell the agency’s vast inventory of assets.

“Outstanding professionals abound at the Port Authority, but the agency’s tremendous growth over the years has outpaced its accountability to the millions of people it serves in New Jersey and New York,” Senator Weinberg said.

New York Assemblyman Brodsky has introduced similar legislation (A-2000) in the Empire State. Both states must pass identical legislation to effect changes at the bi-state agency.

“New York has taken the dramatic first step and will continue to work with New Jersey to recapture the Port Authority to democratic control,” said Assemblyman Brodsky, Chairman Committee on Corporations, Authorities and Commissions which oversees the public authority system in New York.

A key innovation proposed in Senator Weinberg’s bill would be to create the position of an independent Central Procurement Officer to guard against improper lobbying for contracts and to monitor all those who contact Port Authority staff about proposals.

“The Port Authority’s vast influence in the movement of people and goods throughout the Metropolitan Area needs the same checks of accountability, disclosure and ethical standards that all other public agencies adhere to,” Senator Weinberg. “This legislation is designed to make room for the public on the flow charts of Port Authority.”

Senator Weinberg’s proposal has public disclosure exemptions for security and personnel matters, but would require the agency to provide advance notice to the public whenever and wherever Port Authority commissioners have meetings, even by teleconference.

Senator Weinberg said she hopes a hearing on her bill gets scheduled soon in the Senate Transportation Committee which customarily reviews all Port Authority bills. Brodsky’s bill was introduced January 11th and awaits legislative action. 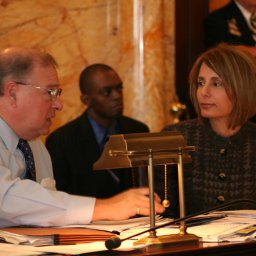 “While Congress and the new President hash out the details of a historic economic stimulus package, New Jersey stands to receive billions of dollars to fund various needs throughout the State,” said Senator Smith, D-Middlesex and Somerset. “As a result of this unprecedented federal recovery package, many programs within State government aren’t prepared to spend the funds that New Jersey is eligible for. This bill would give the Environmental Infrastructure the flexibility to complete its mission and capitalize on the federal stimulus package for states.”