TRENTON – At a news conference at the Statehouse today, Senate Majority Leader Loretta Weinberg and Senate President Steve Sweeney renewed the push for bills sponsored by the Majority Leader to modernize the State’s open government laws and ensure better compliance with good government practices which promote transparency and accountability.

“Since I’ve introduced these bills a few years ago, I’ve received numerous objections from individuals in local and county government who believe that living up to their responsibility for accountable, transparent government represents an unfair burden,” said Majority Leader Weinberg, D-Bergen. “These bills are only intended to modernize and strengthen the existing open government laws on the books, and public officials at all levels should already be doing their best to fulfill their obligations to be accountable to the taxpaying public. We have to recognize that, first and foremost, we serve the public, and the public’s interest is best-served by having access to the product and proceedings of their government.”

“New Jersey residents pay among the highest taxes in the nation, and they deserve to know how their tax money is being spent,” said Senate President Sweeney, D-Gloucester, Cumberland and Salem. “By updating the Open Public Meetings Act and the Open Public Records Act to reflect the way we communicate with each other in the modern world, we’re making it easier for taxpayers to access that information. I commend Senator Weinberg for pushing for these bills to ensure that the intent of open government is realized in the 21st Century.”

The bills, S-1451 and S-1452, would revise New Jersey’s key open government laws to reflect new trends in communicating and accessing information. The “Byron M. Baer Open Public Meetings Act,” also known as the Sunshine Law, was written in 1973; by way of contrast, the Internet hadn’t even been named until 1974. The Open Public Meetings Act was adopted more than a decade ago, before smart phones had gained widespread proliferation among public officials and constituents. The lawmakers noted that it’s past time to update New Jersey’s government laws to reflect the shifting landscape in how people monitor and communicate with government.

“Public officials need to remember at all times they serve the public’s interest, and greater transparency should always be welcomed by those who are honestly serving their constituents,” said Senate President Sweeney. “Given that the original Sunshine Law is four decades old, and OPRA is more than a decade old, it’s time for an update.”

Senator Weinberg also added that she would be introducing provisions – either as amendments to the existing bill, or as separate legislation – to reform the Government Records Council (GRC), in order to improve the agency’s independence and effectiveness. Under the new language, the Senate President and Assembly Speaker would each be able to appoint a member to the GRC, and members of the Governor’s Cabinet who currently serve on the Council would be removed. The new language would also prevent the Governor from removing the Chair of the GRC, similar to the protections in place for the State Comptroller, and the review process would be expedited, with new deadlines as to when the GRC must issue a decision on a pending case.

Finally, the new language would mandate the format and structure of GRC meetings, to ensure that the agency serves as a model for other government agencies of transparency and accountability.

“At its best, the GRC is inept; at its worst, the GRC is obstructionist, employing the same closed-door tactics that erode people’s faith in government,” said Majority Leader Weinberg. “We want to make sure that the organization in charge of open government compliance is a model for every other public agency or body to follow. The changes in this language will ensure that the GRC walks the walk, as well as talks the talk, on open government in the Garden State.”

Both bills have been approved by the Senate State Government Committee, and are pending before the Senate Budget and Appropriations Committee. 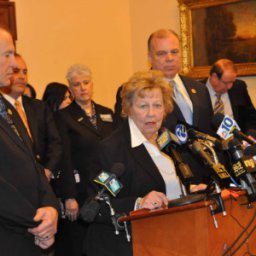 The news conference will be held in Room 103, across from the Senate Chambers.

“In the years since I’ve introduced measures to bring the Sunshine Law and OPRA into the 21st Century, I’ve received numerous objections to the bills from local officials who are more interested in the status quo than effective government transparency,” said Senator Weinberg, D-Bergen. “Where their concerns were warranted, we made concessions, and ultimately, I think their input in these instances resulted in better bills. However, there are far too many public officials in the Garden State who seem to believe that they shouldn’t be held accountable by their constituents.”

“At the end of the day, these folks are elected by the public, they spend taxpayer dollars, and ultimately, should be as transparent and accountable as possible,” said Senate President Sweeney, D-Gloucester, Cumberland and Salem. “Considering that New Jersey residents pay among the highest taxes in the nation for the various levels of government, they have a fundamental right to know how their tax dollars are being spent.”