TRENTON – A bill sponsored by Senator Jim Whelan which would authorize the construction of wind energy facilities on existing and future piers in Atlantic City and statewide was approved by the Senate today by a vote of 36-0, receiving final legislative approval.

“Renewable energy is a booming economic sector, and could help provide green energy – and the jobs and revenue that come along with it – for many years to come,” said Senator Whelan, D-Atlantic. “Along the Jersey Shore, we’ve already made inroads into the green energy market, but if we’re serious about making New Jersey a national leader in the field, we have to expand where we can place wind turbines. By allowing wind farms to be built along existing and future piers in the State, we can expand our capacity and put more people to work.”

The bill, S-212, as amended, would authorize wind energy facilities to be constructed on existing and future piers within 500 feet of the mean high water line, so long as the projects meet other regulatory requirements set for wind turbines. The bill would amend Department of Environmental Protection (DEP) regulations under the Coastal Area Facility Review Act (CAFRA) which only allows for water-dependent energy facilities to be constructed within 500 feet of the mean high water line. The bill would ensure that wind energy production would remain as an accessory use to the other purposes of the pier, in order to maintain that no new piers would be constructed for the sole purpose of serving as a platform for a wind energy facility.

The bill was originally inspired by a proposal to build five windmills on Atlantic City’s famous Steel Pier, a 1,000-foot long amusement pier on the boardwalk. The five wind energy turbines were estimated to provide enough power for all the rides and amusements on the pier.

“Atlantic City’s Steel Pier is an important part of our city’s history, and could play an important role in our future,” said Senator Whelan, a former mayor of Atlantic City. “By allowing the Steel Pier to act as a test site for wind energy production, we can put Atlantic City residents to work, and we can generate clean, renewable energy which reduces our reliance on foreign oil. This project could be a great boon for the people of Atlantic City, and I look forward to more energy independence and more jobs along our boardwalk.”

The bill would serve to advance a state policy that currently encourages the development of wind energy in order to help New Jersey meet its goal of tripling the amount of wind power used to 3,000 megawatts by 2020. The 2020 goal amounts to 13 percent of New Jersey’s total energy and would be enough to power 800,000 homes. This would ensure that off-shore wind energy fulfills roughly one half of New Jersey’s requirement, as outlined in 2005 legislation, that 22.5 percent of the state’s electricity come from renewable sources by 2020.

TRENTON – The full Senate today unanimously approved a bill sponsored by Senator Jim Whelan that would pave the way for the increased development of wind power in Atlantic City, helping the state meet its ambitious renewable energy goals.

“If we expect to maintain our place as a leader in renewable energy, this project will be key to helping New Jersey explore new locations for wind-powered sources” said Sen. Whelan (D-Atlantic). “The Steel Pier in Atlantic City is an ideal test site for what will hopefully be other future projects of this kind along New Jersey’s coast.” 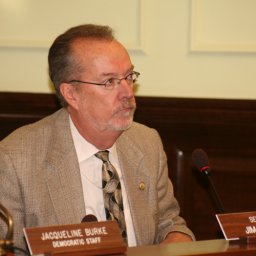 TRENTON – The Senate Environment and Energy Committee today approved a bill sponsored by Senator Jim Whelan that would pave the way for the increased development of wind power in Atlantic City, helping the state meet its ambitious renewable energy goals.

“The Steel Pier in Atlantic City currently serves as an ideal location to help us increase our wind powered energy capacity,” said Sen. Whelan (D-Atlantic). “Hopefully this project will serve as a successful pilot program that can eventually be expanded along New Jersey’s coast, enabling us to solidify our place as a leader in renewable energy.”

TRENTON – A bill sponsored by Senator Jim Whelan which authorizes the construction of wind energy facilities on existing and future piers in Atlantic City and statewide was signed into law last week by Governor Chris Christie.

“Renewable energy offers a unique opportunity to boost our State’s economy and be responsible stewards of the environment at the same time,” said Senator Whelan, D-Atlantic. “As a result, we’re seeing a lot of attention being paid to the green energy market, and New Jersey is already making inroads in terms of off-shore wind energy generation. This new law will help propel us even further, making New Jersey a national leader in renewable energy and allowing us to expand our green energy capacity and put more people to work.”