TRENTON – Legislation sponsored by Senator Richard J. Codey and Senator Linda R. Greenstein that would prohibit the sale and distribution of liquid nicotine unless it is sold in a child-resistant container was introduced today.

Under the bill, liquid nicotine, commonly used in e-cigarettes, that is sold, offered for sale, given, furnished, or distributed must be in a container that is designed and constructed so that it is significantly difficult for a child five years or younger to open.

“With the rise in e-cigarette use, we have also seen a rise in accidental exposure to liquid nicotine by children in New Jersey and across the nation,” said Senator Codey (D-Essex and Morris). “The dangers of liquid nicotine are grave. This bill is a common-sense solution to protect children from any danger that may come as a result of unsafe containers and a means to avoid preventable tragedies.”

“Liquid nicotine is a dangerous poison, and even moreso when it is marketed in candy and fruity flavors that are attractive to young children and sold in containers that are not child-proof,” said Senator Greenstein (D-Middlesex and Mercer). “If we can put the simple measure of requiring child-resistant containers for the sale of liquid nicotine in place, we can safeguard against the unnecessary injury or tragic death of any child as a result of this toxic substance.”

New York passed a similar law last December following the death of an 18-month-old boy from Fort Plain after he accidentally drank liquid nicotine, making his death the first in New York and the country attributed to liquid nicotine.

Under the bill, violations would be punishable by a civil penalty of not less than $250 for the first violation, not less than $500 for the second violation, and $1,000 for the third and each subsequent violation. Additionally, upon recommendation of a municipality involved following a hearing by that municipality, the Division of Taxation in the Department of Treasury may suspend or revoke the license of a retail dealer for violations. 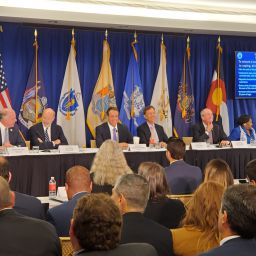