The bill, S-29, would amend current law to require voting machines to produce an individual paper record for every vote cast. The paper record would allow voters to inspect and verify that their vote was successfully and accurately collected. The paper record would then be stored inside the machine, and in the event of a recount, would be used to verify the election results. Under the new law, counties would be required to comply by January 1, 2008, unless granted a waiver by the State Attorney General because the technology is not yet commercially available, and counties could apply to be reimbursed by the State for the cost of purchasing and retrofitting a machine if federal funds are not made available.

“The advancement of technology has placed us well within the Computer Age, but electronic and computer voting machines are vulnerable to malfunction,” said Senator Gill. “A voter-verified paper trail allows us to have a tamper-proof back up that will ensure that the stability of democracy does not become an unintended victim to our continuing technological sophistication.”

Over two hundred years ago early Americans went to war, in part, because they believed that the King of England had treated them unfairly by denying them the right to vote and fair representation. When Thomas Jefferson wrote the Declaration of Independence, he created a document protesting taxation without representation and other government abuses by King George. In fact, most of our nation’s history can be characterized by a struggle with deciding who receives the right to vote. Many different Americans have been denied the right at various times. Many citizens have suffered violence, and some have died trying to secure the right to vote. The right to vote is precious. It is a fundamental right. Today, millions of Americans enjoy the right because of the Voting Rights Act of 1965.

This year marks the fortieth anniversary of the Voting Rights Act of 1965. During its 40 years, the Act has been hailed as the most successful piece of civil rights legislation ever. It is one of the most effective federal laws ever enacted. So it seems only fitting that Senate Bill 29 becomes law during this commemorative year.

The Help America Vote Act requires the replacement of lever and punch-card voting machines. Given today’s technological advances, computerized voting machines are the wave of the present and future. Computerized voting equipment is inherently subject to programming error, and or equipment malfunction. It is therefore crucial that voting equipment provide a voter-verifiable audit trail, a permanent paper record of each vote that can be checked for accuracy by the voter before the vote is submitted, and is difficult or impossible to alter after it has been checked. This is exactly what Senate Bill 29 does.

Preserving and ensuring the integrity of the vote is our utmost concern. Every American citizen must have an equal vote. In order to protect the value of the vote, to guarantee the integrity of the voting process, to honor the lives that were sacrificed so that all citizens can vote, we must continue to enact legislation that reflects the advancement in technology as it relates to voting.

I give special thanks to Governor Codey, my senate co-prime sponsors, Senator Shirley Turner and Senator Wayne Bryant, and Assemblyman Reed Gusciora, the Assembly sponsor.

I would also like to give special thanks Rene Steinhagen from Appleseed, Penny Venetis from my alma mater Rutgers School of Law Constitutional Clinic, Justin Levitt from the Brennan Center for Justice, the BlueWave New Jersey, and the countless other supporters who contacted my office.

In paraphrasing President Lyndon B. Johnson, the vote is one of the most powerful instruments of our democracy designed to break down injustice and destroy the terrible walls which imprison people because they are different from one another 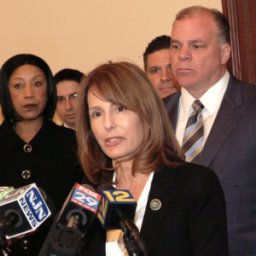