TRENTON – A bill sponsored by Senator Ellen Karcher which would allow municipalities of fewer than 500 residents to conduct elections by mail was signed into law today by Governor Codey.

“In other places throughout the country where voting by mail has already been implemented, it has been a success, allowing voters more time to consider their ballot choices in the comfort of their own homes,” said Senator Karcher, D-Monmouth and Mercer. “On a small scale, we can bring that same model to New Jersey, and if it works as a pilot program, expand it to larger municipalities when appropriate. The end result will ultimately be greater participation in the democratic process, and greater voter attention to elections.”

The bill, S-2389, will allow municipalities with a population under 500 to conduct all elections by mail, provided that the governing body of the municipality and the county where the municipality is located approve such an action. Under the bill, voters will receive a ballot and a copy of the voter bill of rights in the mail not sooner than the 20th day before an election, but not later than the 14th day prior. Voters will then have until a certain time on Election Day, to be established by the local Board of Elections, to get their ballots to the Board to be considered valid.

The bill also sets up guidelines to protect ballots from tampering and voter fraud, such as a two-envelope system, with a signature of the voter on the outer envelope, to be verified before processing, and at least one accessible voting machine must be made available in the office of the municipal clerk on election day, as a backup to the mail system.

“With this new law, we have struck an accord between convenience to voters and the security of the voting process,” said Senator Karcher. “I am confident that voting by mail will not subject the voters of New Jersey to any sort of fraud or abuse, but rather, will make it easier for voters to take part in the process of electing their representatives. With proper oversight and appropriate safeguards, this stands to be a very big positive for the election system in New Jersey, and will encourage more voters to get involved in choosing their political leaders.” 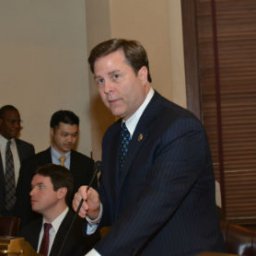 TRENTON – Legislation sponsored by Senator Donald Norcross (D-Camden/Gloucester) that would better protect employees of New Jersey’s interstate authorities by requiring those entities to comply with the state’s Occupational Safety and Health Act was approved today by the Senate Transportation Committee.

“All public entities operating exclusively in New Jersey are required to comply with occupational safety and health regulations. However, the state’s bi-state and multi-state agencies are currently exempt,” said Senator Norcross. “It must be a priority for us to ensure that all public employees are protected from health and safety hazards. This bill goes a long way to do that. Further, it ensures that if, in fact, unsafe conditions exist in the workplace, employees will have an opportunity to bring the conditions to the attention of the state and to have them corrected without concern for punishment by their employer.”