“This legislation will ensure accountability by those who are supposed to be serving the public interest by getting us the best possible services at the lowest possible price,” said Senator Scutari, D-Union, Somerset and Middlesex.

In its June report, “E-ZPass: The Making of a Procurement Disaster,” the SCI found widespread mismanagement and manipulation of the contracting process by senior officials of the New Jersey Turnpike Authority and the State Department of Transportation during the Whitman Administration.

As a no-bid, professional services contract, the E-ZPass award to MFS Technologies of Omaha, Neb., in March of 1998 was similar to another multi-million dollar contract disaster awarded by the Whitman Administration to Parsons Technologies of Pasadena, Ca. to revamp the motor vehicles inspection system.

The SCI report revealed that the E-Zpass contract was based on a flawed projection – that its electronic toll system would pay for itself through fines paid by toll cheats. That projection was accepted with virtually no scrutiny by the State officials charged with overseeing the contract and ended up throwing the project hundreds of millions of dollars into debt.

Startup costs for the E-ZPass contract were covered by $300 million in interest-bearing bonds issued by the State’s Economic Development Authority. The money was to be repaid by fines on toll cheats and through the sale of fiber optic space along the network of toll roads. But by the end of last year (2003), the cost of the project had mushroomed to over $575 million while revenues to pay for it barely reached $100 million, according to the SCI probe. Moreover, projections called for $311 million to be realized from fines against toll cheats when, in fact, less than $20 million was collected from E-ZPass violators.

The SCI probe also faulted the State for lax contract oversight, untrained contract evaluators and undue pressure by superiors to get desired approvals from underlings about vendor projections.

“This bill would require State-authorized vendor evaluators to be proficient in the area of the contract and to have relevant experience to assess a project,” Senator Scutari said.

The bill, further, would restrict the type of State contract that could be awarded as a “professional service” for which the normal bidding process could be bypassed. It also would require State officials who deal with potential contractors to keep written records of contacts with vendors which would become public information after negotiations are completed.

“As the E-ZPass debacle demonstrated, the existing procurement process lacks proper oversight and accountability and is prone to all sorts of abuse,” said Chairman Edwards.

“This bill (S-2194) would correct a number of serious deficiencies and we are gratified by the Senate’s timely response to our findings and recommendations,” Edwards added.

Other key aspects of the bill would:

Permit a State agency to put notices of intent about an upcoming contract on the Internet to solicit information from potential bidders.

Ban members of contract evaluation committees from having any family ties, personal interest or financial links to any potential vendors.

Direct the Director of the Division of Purchase and Property to set regulations for contract oversight and for monitoring contract performance.

Authorize the Purchase and Property Director to enter into bulk purchase agreements with other states or agencies for supplies deemed necessary for domestic preparedness and homeland security.

Require all State employees who communicate with potential or actual bidders on contracts to keep written records of those contacts for at least three years.

Establish a clear line of authority for a State Contract Manager to oversee and monitor complaints and to settle disputes about vendor performance in all major State contracts. 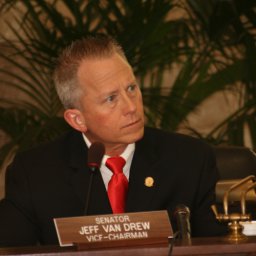