TRENTON – A bill sponsored by Senators Raymond J. Lesniak and Teresa Ruiz which would authorize the transfer of surplus public lands to be used for nonprofit urban farming and gardening projects was approved by the Senate today by a vote of 35-2, receiving final legislative approval.

“Through this legislation, we can strike a blow against hunger in our urban communities, improve access to nutritional food for city residents, and help clean up urban blight,” said Senator Lesniak, D-Union. “While cities cover only 2 percent of the world’s surface, they use up nearly 75 percent of the world’s resources. This bill is about creating a more sustainable model, reclaiming land in our urban centers for green space and allowing urban residents an opportunity to make better nutritional choices.”

“The urban agricultural movement is gaining a lot of steam nationally, in part due to the need for locally-grown produce in our cities and the need to preserve green spaces in our State’s urban core,” said Senator Ruiz, D-Essex and Union. “As the most densely-populated State in the nation, it’s time for New Jersey to begin to incentivize urban farms and co-op gardens in order to improve the quality of life for urban residents on so many levels. This bill would put unused, vacant plots of public land to good use for urban residents.”

The bill, S-1964, would authorize counties and municipalities to make certain public property available for sale or lease to nonprofit entities for a nominal fee for the purpose of urban farming or gardening. Under the bill, nonprofit organizations would be able to purchase or lease vacant public property within an urban municipality, so long as the tract of land is less than five acres in size. The property would have to be used for the cultivation and sale of fresh fruits and vegetables, or provisioned by a nonprofit organization for gardening services available to the general public, and would be exempt from property taxation.

According to the bill sponsors, the goal of the legislation is to transform vacant public lots into vibrant gardens and urban farms, in order to provide low-cost fresh produce to urban residents and help beautify blighted urban neighborhoods. The urban farming and gardening movement has grown in popularity nationwide in recent years, and is making strides to eradicate urban hunger and encourage green space in urban communities.

“In urban areas where supermarkets can be few and far between, it can be difficult for residents to get access to fresh produce,” said Senator Ruiz. “This bill creates new opportunities for local residents to make healthier nutritional choices.”

“This bill would allow our cities to become far more sustainable, and would bring a little piece of nature into urban neighborhoods,” said Senator Lesniak. “It makes health sense, it makes environmental sense, and it makes economic sense to allow empty urban lots to be used for farms and gardens. By promoting an urban agricultural model in New Jersey cities, we can work to beautify urban neighborhoods and bring nutritional food into neighborhoods where access is severely lacking.” 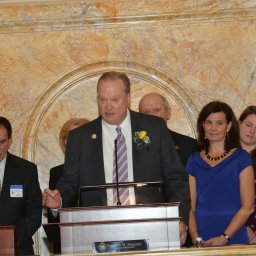