TRENTON – Senator Raymond J. Lesniak, D-Union, the prime sponsor of legislation which would create a registration and reporting system for tigers held in captivity within the State of New Jersey in order to discourage the worldwide black market for tiger body parts, issued the following statement after the Governor conditionally vetoed the measure to create a three-member Task Force on the Illegal Trade of Endangered Species and Exotic Animals:

“We live to fight another day. Hopefully, the governor’s conditional veto will give us an opportunity to educate the public in New Jersey and indeed throughout the United States and other countries of the plight of endangered species and the inhumane trafficking of tiger parts which threatens the very existence of tigers on our planet.” 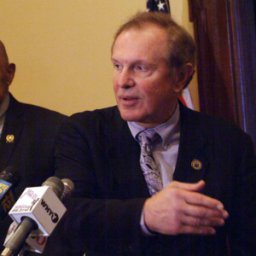 TRENTON – A bill sponsored by Senator Raymond J. Lesniak which would create a registration and reporting system for tigers held in captivity within the State of New Jersey in order to discourage the worldwide black market for tiger body parts was approved by the Senate today by a vote of 38-0.

“When it comes to social justice causes, like abolishing the death penalty, New Jersey has not only been a national leader, but an international leader,” said Senator Lesniak, D-Union. “Today, we can once again take a stand by sending a message to other states, the federal government, and the international community that New Jersey cares. We care about protecting other animal species which share the planet with us. We care about the inhumane treatment of animals. We care, and we’re willing to do something about it.”

TRENTON – A pair of bills sponsored by Senator Raymond J. Lesniak which would crack down on the illegal trade of tigers and prohibit inhumane ‘gestation crates’ which restrict pigs’ freedom of movement was approved by the Senate today.

The bills are part of a larger legislative push by Senator Lesniak to address animal cruelty in the Garden State.

“Animals are God’s creations as much as humans,” said Senator Lesniak, D-Union. “These bills recognize that cruelty to animals and threats to their extinction need to be eliminated. If we’re serious about justice, fairness and compassion for all living beings, we have to extend those same considerations in our dealings with people as well as with animals.”