TRENTON – Seeking to return New Jersey to a multi-state program that reduces air pollution in the Northeast, a Senate committee on Thursday endorsed legislation sponsored by Senator Raymond Lesniak that would seek voter approval to put the state back into the Regional Greenhouse Gas Initiative, a cooperative and coordinated program that reduces airborne carbon dioxide. Governor Chris Christie removed New Jersey from RGGI and has stymied efforts by the Legislature to rejoin the nine other states in the region that are working together to protect their residents from the ill effects of carbon-laced smog.

New Jersey participated in RGGI from its inception in 2005 until 2011, when Christie unilaterally withdrew. He later vetoed legislation that would have mandated the state’s participation.

“Unfortunately, the Governor is more concerned with the ‘political atmosphere’ in other states as he looks to run for president than he is about the state’s natural resources,” said Senator Lesniak. “This is an environmental issue that has an impact on public health.”

The regional agreement provides incentives to power companies to cut down on carbon emissions, allowing them to buy, sell and trade “allowances,” or limits on the volume of pollutants.

The proposed constitutional amendment, SCR-162, was merged with a companion bill, SCR-146, which would have the voters also approve the dedication of revenue to clean energy programs. The combined bills, SCR-162, were then voted out of the Senate Environment and Energy Committee four to one. 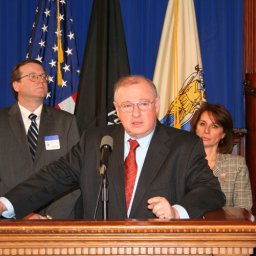