TRENTON – Senate President Steve Sweeney today announced that S-2965 would be expanded to include multiple proposals to address college affordability and be renamed the “College Affordability Study Commission” to indicate the expansion of the Commission’s duties beyond just tuition.

“We know that our students today will not be able to find the good-paying jobs they need to succeed without a strong higher education, but when they do find those jobs we’re allowing them to enter the workforce with debt loads that continue to hold them back,” said Sweeney. “A college education is supposed to be the great equalizer. But our current system is completely unfair to thousands of students.”

The expanded legislation urges creation of an Affordable Degree Pilot Program to provide a low-cost higher education to students through partnerships between county colleges and four-year public institutions that provide discounted tuition rates, as well as an Accelerated Degree Pilot Program that would graduate high-performing students who are interested in pursuing a medical degree, or graduate-level science or engineering degree, earlier than would be possible under a traditional program.

“Any options that may help ease the burden of college expenses on New Jersey families and allow more students to pursue college aspirations are worth exploring,” said Sweeney. “The recent partnership between Gloucester County College and Rowan University, which expands opportunities for students without requiring additional spending is exactly what this commission will be seeking to replicate and expand upon. We must make college more affordable for our residents and every idea should be explored.”

In 2011, 3.2 million more people enrolled in higher education programs than in 2006, an 18 percent increase that was the largest such jump since the end of the Vietnam War. As the financial crisis hit, many people who lost their jobs went back to school, as evidenced by the 1.2 million student-enrollment increase among those aged 25 and above from just 2007 to 2008.

So that all aspects of the cost of attending college are explored by the Commission, the substitute would also direct the Commission to look at the NJBEST 529 College Savings Program and the NJCLASS Loan Program and provide suggested changes to the programs that would incentivize investors to choose the NJBEST program and provide more attractive terms and transparency for students borrowers who qualify for NJCLASS loans.

The commission would also study the creation of a proposed “Pay Forward, Pay Back” pilot program. If the commission determines that such a program is warranted, it would replace the system of charging students tuition and fees for enrollment at public institutions of higher education and instead allow students to pay back a percentage of their income upon graduation for a certain number of years

The Commission’s membership expands from seven to ten members and consists of the Secretary of Higher Education, the Executive Director of the Higher Education Student Assistance Authority, representatives of higher education institutions, faculty members, a student representative and members of the public.

The Senate Higher Education Committee approved the bill by a vote of 5-0. 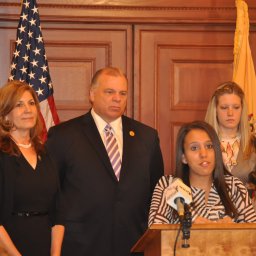 TRENTON – Joined by students who have had difficulty dealing with New Jersey’s skyrocketing tuition costs, Senate President Steve Sweeney and Assemblywoman Celeste Riley today discussed their plan to introduce legislation that would create…