“Tuition is the problem no one seems to be talking about. It directly impacts not only our best and brightest, but the working families that are desperately trying to put their kids through school. Something has to change. It is long past time we review this issue,” said Sweeney.

“‘Pay Forward, Pay Back’ may not hold all the answers, but it will certainly get the conversation rolling on the issue of tuition costs. To have education in New Jersey cost so much and be such a burden lacks all common sense. We are preventing the people who will shape our future from being able to obtain quality education, and in many instances even pushing them out of New Jersey. That has to end,” said Riley.

Sweeney and Riley both pointed out that tuition at Rutgers University, the state university of New Jersey, has nearly doubled in the past ten years, rising at nearly the same rate as New Jersey’s property taxes. The average property tax bill in New Jersey in 2012 was $7,634. Tuition at Rutgers for the 2012-13 school year was $10,356 (Property Tax vs Tuition_2).

The intent of the pending legislation will be to create a seven member commission to study the creation of a proposed “Pay Forward, Pay Back” pilot program. If the commission determines that such a program is warranted, it would create the option of foregoing charging students tuition and fees for enrollment at public institutions of higher education and instead allow students to pay back a percentage of their income upon graduation for a certain number of years.

Joining Sweeney and Riley were Emily Kerr of Maple Shade and Maria Asiz of Edison. Emily, 20, began attending Burlington County College, as a history major, in the Summer of 2011, paying out of pocket for a course. For the Fall 2011 semester she applied for federal aid but did not qualify. She then began paying for classes through a loan. For the coming 2013-14 school year, she planned on attending either Rutgers University or Rowan University. But due to high costs and the amount of debt she has already accrued, she had to drop out of school. Emily now works full-time as a receptionist trying to make enough money to put herself through school.

Marie, 21, is a senior at Rutgers University, majoring in political science and Middle Eastern studies. In addition to her double-major, she works 40 hours a week at a restaurant in order to keep up with the cost of tuition at the school. 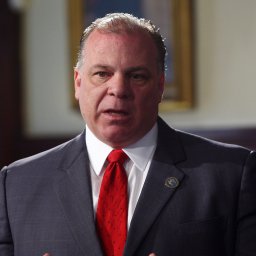