Lawmaker Also Receives More Than 100 Dog Tags Lost in Vietnam, Vows to Work to Return them to Families

TRENTON – At the inaugural meeting of the Senate Military and Veterans’ Affairs Committee yesterday, Committee Chairman Jim Beach said that he was honored “to serve those who have done so much to serve us” and vowed to work on behalf of New Jersey service members and veterans around the State.

“New Jersey owes a debt of gratitude to the brave men and women in uniform who have served us as part of our nation’s military,” said Senator Beach, D-Camden. “I’m proud and honored to serve as the first Chairman of the newly-established Senate Military and Veterans’ Affairs Committee, and will do everything I can to promote measures designed to give back to those who’ve given so much for the causes of freedom and the American Dream.”

As part of yesterday’s hearing, Senator Beach was presented with more than 100 sets of dog tags from U.S. Servicemen stationed in Vietnam by George Greco, a friend of the Senator’s who delivered the tags on behalf of another friend, Manny Santayana. Mr. Santayana, while on vacation in Vietnam, came across a young Vietnamese boy selling trinkets on a blanket along the Ho Chi Mihn Trail in Khe Sahn. He purchased an ammunition can for $100, and when he looked inside, he found the dog tags.

“Each one of these dog tags represents an untold story, and may help put to rest lingering questions about the fate of a loved one,” said Senator Beach. “My office is going to use every possible resource to try to track down family members for every single dog tag. We owe it to the memory of the brave soldiers who fought in Vietnam to help these families reach closure.”

Senator Beach added that since making the discovery, Mr. Santayana has tried to track down the family members of the military service members who owned the dog tags; however, he has had limited success due to privacy laws. Senator Beach has tried to assist, working with the Camden County Veterans Office and veterans groups from Gloucester County, and as a result, they’ve been more successful.

The Camden County lawmaker said yesterday that he will continue searching for families for the remaining dog tags, and will be responsible for securing the tags until the rest of the families could be found. He said that his first order of business would be to contact the U.S. Department of Defense to see if the serial numbers on the dog tags matched any soldiers listed on MIA, POW, or KIA lists maintained on databases in Washington. After that, the Senator will work with veterans groups such as the American Legion and the VFW to reach out to the families of veterans, and will establish a Web site to try to reach a wider audience via the Internet.

In addition to being presented the dog tags at yesterday’s hearing, two bills sponsored by the Senator received unanimous Committee support.

The first bill, S-589, would require the State Division of Veterans’ Training, Information and Referrals within the Department of Military and Veterans Affairs to coordinate with other veterans service offices to provide the surviving beneficiary of a deceased service member with a comprehensive packet containing information on all federal and State benefits programs for which the beneficiary is eligible. The Division would develop the packet of information, and provide all other veterans service offices in the State with a supply of packets for distribution. Receipt of a notice of death of a service member who resides in New Jersey, or whose surviving beneficiary resides in New Jersey, would trigger the Department and its appropriate regional veterans service offices to contact the beneficiary with the information.

“The surviving beneficiaries of soldiers who’ve died in the line of duty are entitled to support from a grateful State and federal government,” said Senator Beach. “However, many of these mourning family members aren’t aware of the full extent of the programs for which they’re eligible. By directing the Department of Military and Veterans Affairs to reach out to surviving family members, we can make sure that these folks receive all the benefits that they so rightfully deserve.”

The second bill, S-590, would require the Department of Military and Veterans Affairs to provide a link on its Web site to access the directory of public and independent institutions of higher education found in New Jersey. The bill stipulates that the link to institutions of higher education would be placed on the page on the Department’s Web site that lists the educational benefits available to veterans in the Garden State.

The bill would also require all public institutions of higher education in New Jersey to include a link on their Web sites to access information on educational benefits available to veterans, through the Department of Military and Veterans Affairs site. The link must be placed in a prominent location on the college or university’s Web site and its content must be in accordance with the New Jersey Commission on Higher Education.

“Anything we can do to help ease the transition for our active-duty military personnel to civilian life, we should pursue,” said Senator Beach. “Through this legislation, we can give soldiers information about pursuing a higher education at the same time we inform them about the education benefits available to them through the GI Bill and other State and federal programs. This bill will make it even easier for our State’s military service members to get a college degree and increase the earning potential after their service in the armed forces.” 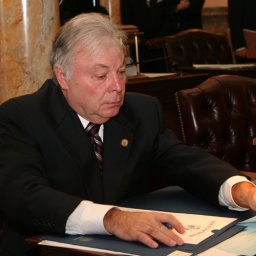 Legislation Senator Jim Beach sponsored to ensure the families of deceased service members are provided information on survivor programs for which they are eligible was recently signed into law by Gov. Chris Christie.

The new law requires the State Division of Veterans’ Training, Information and Referrals within the Department of Military and Veterans Affairs to coordinate with other veterans service offices to provide the surviving beneficiary of a deceased service member with a comprehensive packet containing information on all federal and State benefits programs for which the beneficiary is eligible.